On May 19, 2010, a headline in the San Jose Mercury News announced "Stanford University prepares for an amazing bookless library." Beneath these words one could read the specifics. It did not mean "no" books, it meant "less" books. And what it demonstrated is that Stanford University libraries are adding more digital content to their holdings at a very rapid rate as well as the technology to access and use it. This phenomenon reflects a revolution in scholarly communications and learning, a massive migration to a digital and virtually connected world. Within the crossdisciplinary arena of Jewish Studies, alongside the traditional print journals, conference proceedings, and academic presses new forms of digital scholarship, discourse, and output that challenge scholars to reorient the way they think about and conduct their work are appearing. This includes work and methods of communication that have been entirely "digitally born," in other words, scholarly and creative output that do not or cannot have a print or analog version. Some of these digitally born works and methods may even have been initiated outside of the academy or by students.

Among the spate of e-book offerings available via commercial publishers, university and academic presses, scholarly societies, or aggregators that package e-book content from different publishers is a relatively new phenomenon, one in which a title comes first in digital form and then—if at all—in physical form. One of the early experiments was the ACLS (American Council of Learned Societies) History E-Book Project (now known as the ACLS Humanities E-Book project), which began in 1999 with the aim of publishing a combination of classic history texts and new, more experimental titles via digital platforms that can go beyond the boundaries of print and offer scholars cutting-edge technology with which to present their scholarship. These can include audio and video files, interactive maps, and links to databases, related scholarship, and archival materials, and 24-hour accessibility from a computer or e-book reader.

A search via Library of Congress subject headings within the collection did not reveal any born-digital titles that fall within the scope of Jewish Studies but as this project moves into its second decade, new titles and areas of study are entering the collection. Fortified with this knowledge, the Association for Jewish Studies (a member of ACLS since 1985) along with librarians responsible for Jewish Studies collections in academic libraries can encourage Jewish Studies scholars to explore this viable alternative to more traditional and static methods of scholarly monographic publishing.

Online journals in Jewish Studies generally follow the same types of editorial principles that ensure compliance with scholarly standards of other academic journals that have either moved to digital platforms, simultaneously publish in print and digital formats, or were born digital. Some of these journals are embracing new technologies and publishing paradigms: adhering to the open access model, providing quicker access to new work, being easily searchable, providing multimedia features, promoting interactive participation such as online and community discussions, and options to comment on articles.

Among the most recent born-digital scholarly journals in Jewish Studies are Quntres: An Online Journal for the History, Culture, and Art of the Jewish Book; Quest: Issues in Contemporary Jewish History; Perush; and The Journal of Inter-religious Dialogue. These journals were conceived with the vision that the future is digital, and with a desire to stimulate and encourage dialogue and debate among researchers, academics, as well as the general public. These last three provide opportunities at their websites for reader comments, input, and feedback.

Geographic Information Systems (GIS) are computer-based tools that allow mapping and spatial analysis of the earth's features and events. Scholars in humanities and social sciences are collaborating with experts in GIS and using a spate of freely available tools such as Google Maps and Google Earth to create resources that bring together maps, photographs, and artifacts.

HyperCities is a collaborative project and website, developed by UCLA, USC, and CUNY. This work in progress takes a spatial approach to history and uses the Google Earth platform to explore the historical layers of urban spaces such as Tel Aviv in an interactive, hypermedia environment. What is interesting about the project is that it enables researchers to study the history of city spaces, urban planning, neighborhood composition, and demographics in new and innovative ways.

An innovative artistic experiment that uses GIS to codify Jewish spatial practices was undertaken in 2005 with eRuv: A Street History in Semacode, a digital graffiti project installed along the route of the former Third Avenue elevated train line in lower Manhattan. Lodged in the heart of the urban New York space, the train line historically had served as part of an eruv for a Hasidic community on the old Lower East Side. The community is now gone, but using camera phones with a protocol that brings together the Internet and physical space, interested parties can access this piece of history.

Born-Digital Literature and the Arts

The Internet has encouraged the development of new modalities of literary and artistic expression. The examination and study of these phenomena has already well made its way into the academy with many universities housing or offering programs for the study of digital media.

Born-digital poetry on the Internet consists of literary works that have been created and disseminated on the Web. Publication of poetry in print has been moved more and more into small-run and boutique journals and monographs. As a platform, the Web has enabled the publishing of poetry to move from high cultural echelons into a popular creative realm. In Israel, poets have been using the Internet for years. Bama Hadasah began under the initiative of Boaz Rimmer in 1998 as a free online archive of original Israeli prose, poetry, music, and art. The site includes more than 200,000 poetic works, and hundreds of thousands of works of art. While the site does not have a formal literary editor, the editors maintain some editorial control.

The Israeli Center for Digital Art in Holon supports an archive for video and digital art. The site contains more than 1,750 works. The archive is intended primarily to represent local contemporary artistic practice and includes video art, sound art, film, and documentation of performances and installations that have been exhibited at the center, as well as other works by leading Israeli artists in the field of media art. There is thematic commonality among many of the works, which reflect questions of identity, nationalism, reactions to militarism, and other social and political issues facing the country.

Although academics are just touching the surface of social media use, a recent report in Wired Campus (blog of the Chronicle of Higher Education) noted that 80 percent of professors use some sort of social media such as blogs, wikis, Twitter, and social networks like Facebook as venues for discourse and discussions, teaching, and learning. Publishers and hosts of more traditional discussion forums such as listservs and e-mail lists are taking note that the content of these services are more and more becoming limited to job announcements, conference announcements, and book reviews because they lack the dynamic nature and immediacy of these other newer platforms. Significant to note is that the H-Judaic and Hasafran listservs still serve as primary focal points for research queries in Jewish Studies.

In the early days of blogs, many scholars were hesitant to post for fear that these informal musings and comments would be mistaken for formal scholarly discourse and output. Today however, scholars and academics understand that, while blogs are not the final word or product, they offer a viable (and citable) record of scholarly thought. Blogs by their nature can engage a much wider community in the discursive process. Jewish Studies is a discipline for which there is much expertise outside the academy. As more and more scholars within Jewish Studies post to blogs of Jewish content, their comments, reviews, and arguments mingle with those of graduate students, rabbis, and knowledgeable people outside of the academy and seminary. Many online book reviews can be found in blogs. At the Seforim blog, ninety-five posts were recently listed under the label "book reviews." These open reviews are often provocative and can take the form of essays, and evoke responses and comments from within and beyond the academy.

Some people find the amount of time it takes to post to blogs cumbersome. Organizations such as the Association for Jewish Studies, several Jewish Studies departments, and some academics take advantage of the immediacy and brevity of Twitter, a sort of miniblogging service to send out announcements, disseminate information on a variety of topics, or track a conference.

Academia.edu is a fairly new social networking tool similar in format to Facebook that helps people in the academic world to locate academic departments, universities, journals, and individuals with similar research interests, keep up to date with their work, read their papers and blog posts, and be notified of their talks. A recent search under Jewish Studies brought up ninety-nine people, one hundred papers, seventy research interests, fifty-one departments, and nineteen journals.

Although still open to controversy in some circles, Wikipedia has become a first stopping point for many across the academic landscape as well as the general populace. Encyclopedias are never scholarly resources in and of themselves, but for research in Jewish Studies they are useful repositories of information. Wikpedia and its Hebrew language sibling Vikipedyah are some of the most complete and useful sources of contemporary information. The Library of Congress authority file, one of the most widely used thesauri for providing standardized forms of names and headings for catalogs and databases of all types of media, is expanding their list of authorized resources to be consulted when considering forms of Hebraica names to include "modern references sources . . . (e.g., Wikipedia, Facebook, LinkedIn)."

Research organizations, museums, archives, and libraries are digitizing millions of cultural objects and information and publishing them on the Web. This has usually been done independently and without synchrony, forcing researchers to try numerous manual search strategies to get to what they are looking for. Right now both computer scientists and scholars are conducting a great deal of research on how this information can be made more accessible for the end-user and help researchers to locate as precisely as possible the relevant materials that they are seeking. Using new information technologies such as "linked data" and "structured data" as a way of publishing information so that it can be easily and automatically linked to other similar data on the Web, information becomes connected or "linked" so that users can more easily access what they are looking for as well as explore related topics and subjects.

Frank Schloeffel, a scholar affiliated with the "Ismar Elbogen Netzwerk für jüdische Kulturgeschichte e.V." and a group of colleagues have gotten together to develop a prototype of a virtual space "JewLib. Digital Archive-Library" utilizing these technologies. Their goal is to provide researchers with an online source of facts and information on primary research resources for the study of Jewish history and cultures. Similar in concept to Wikipedia, the responsibility for adding or modifying information relies on the community with the ability to work in the database open to anyone after registering. What is truly exciting about this project is that a new, young generation of Jewish Studies scholars with an understanding of the vitality of communitydriven endeavors is becoming familiar enough with digital tools and practices to develop resources useful for scholary pursuits.

The ways of teaching, learning, and scholarship are radically changing and the Internet is becoming the primary medium for publishing and creating new content. The Web is breaking down geographic and social barriers as scholars discover and forge new relationships and new ways of thinking and communicating. Just as they maneuvered in a print and analog world, Jewish Studies scholars—like all academics—need to be familiar and conversant with the tools and structure of this digital environment. 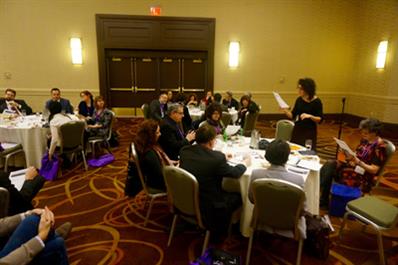