Dealing with Your Dean

One of my favorite moments in the film “Shakespeare in Love” is when a minor actor in the ensemble is asked to explain the plot of “Romeo and Juliet.” “Well,” he says, focusing on his own role, “it’s about this nurse.”

This illustration of solipsism and limited perspective came home to me when, in 2009, after twenty-one years of serving as a chair or director of a Jewish Studies program, I became the Associate Dean of Humanities in the University of Oregon’s College of Arts and Sciences.  As the Humanities Associate Dean, a role in which I served for six years, I had responsibility for overseeing the academic programs, governance procedures, budgetary allotments, promotion and tenure cases, and hiring processes, among other concerns, of sixteen academic units (departments and programs). A number of these departments awarded graduate degrees, including the Ph.D., and many employed large numbers of non-tenure-track faculty, especially those departments that taught composition and second language courses. In addition to the numerous daily intricacies of assisting in the smooth running of these various academic constituencies, my colleagues and I also faced frequent, unexpected personnel matters ranging from health and family issues to sexual harassment to inter-collegial disputes. As I was exposed to this expanded view of my academic setting, which also included competition for scarce resources with other university schools and colleges, insufficient stipends to attract the most promising graduate students, and the struggle to retain outstanding faculty tempted by outside offers, the problems of one little program, for which I had advocated against imagined deaconal persecution for so many years, shrunk in significance.

Thus, in addressing how new Jewish Studies program directors might interact with their deans, I suggest it is always a good strategy to try to understand the administrators’ points of view, however wrongheaded they may seem, as you work to advance your program’s goals.  Here are a few brief pieces of advice:

(1) Jewish Studies programs are usually small and in most cases do not offer graduate degrees; they are, therefore, seen as less central to the university’s research mission. Those that offer the B.A. can have difficulties attracting significant numbers of majors. Deans, who mainly look at the numbers, need to be convinced that such programs should continue to exist, especially if outside funding is not there. Directors can counter negative judgments by offering high quality courses with broad appeal that also fulfill disciplinary and diversity requirements, demonstrating that the Jewish Studies unit is playing a valuable service role. Similarly, forging alliances with faculty in other departments and programs who offer courses in Jewish Studies areas, or could be persuaded to do so, can also increase the reach of the program and strengthen its position. Competitive summer funding awards for faculty proposing new courses can yield excellent additions to the curriculum. Through good advising, you may be able to show students that they already have almost enough courses to combine a Jewish Studies major with a first major in another field, thus increasing your critical mass.

(2) Directors should include their Deans in community outreach events, even when the programming is funded with outside resources. This begins with keeping the Dean informed (email is fine) during the event-planning process. Be transparent about the funding and, where fundraising is involved, be sure that appropriate development officers are on board and have a role. Directors should invite their Deans and, for particularly significant events, other upper administration figures to offer words of welcome. This gives event attendees a sense of inclusion in the larger institution while enabling your dean to see the extra-university community that supports your program.  Even if the dean cannot stay for the program itself, her or his brief presence is a positive. Be sure to introduce the dean to important donors and community supporters.

(3) Finally, be a positive player in your relationship with your direct administrator, despite whatever resentments you may feel at perceived funding slights, lack of appreciation for what you do, and the other slings and arrows of daily university politics. A small number of faculty create a significant percentage of deaconal aggravation; being among their number will not benefit your program. Update your dean about the important things, deal with the small stuff on your own, and accept that you and your program are minor actors in a much larger production that is, itself, constantly competing with other university units for resources and recognition.

Judith R. Baskin is the Philip H. Knight Professor of Humanities in the Harold Schnitzer Family Program in Judaic Studies and the Department of Religious Studies at the University of Oregon 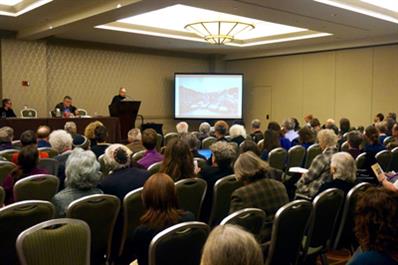