As a recipient of a Littauer Foundation travel grant, I traveled to Washington, D.C. in December 2011 to present a paper at the 43rd Annual Conference of AJS. The paper I presented, "Notes on Midstream: Shlomo Katz, American Zionism, and Highbrow Culture at Midcentury," was part of a panel on Jews in American culture in the mid-20th century. While for many, highbrow American culture in the mid-20th century is synonymous with Commentary, Partisan Review, and Dissent, Midstream magazine, which shared a New York Jewish milieu with those magazines, has largely been neglected in discussions of the period. My paper asked how Midstream, founded by the Theodor Herzl Foundation of the Jewish Agency in 1955, positioned itself as a "highbrow" Zionist journal before postwar American Jewish readers? My goal, in part, was to redress editor Shlomo Katz's virtual absence from the historical record: I argued that a close look at Katz's persona as a writer and editor and an assessment of his particular contributions to American Jewish life and letters sheds new light on the innovations, failings and achievements of American Zionist culture at midcentury.

As I had hoped, presenting my research at AJS afforded me a chance to exchange ideas with colleagues who work in similar areas. When one does work on recent history, as I do, the give-and-take at the end of the panel session can be particularly fruitful. At the end of this panel session, for example, one audience member (herself a scholar of American Jewish history) recalled seeing stacks of Midstream magazine in her parents' bedroom as a child, a memory that illuminates the magazine's iconic role for American Zionist intellectuals in the postwar period.

The benefits of writing and presenting a paper for AJS have lasted well beyond that December day. In the months that followed, I transformed the paper into a fleshed out chapter of my book, tentatively titled Bringing Zion Home: Israel in American Jewish Culture, 1948-1967. The book, which grapples with the role of Israel in American Jewish culture in the first postwar decades, is currently under review with a university press. 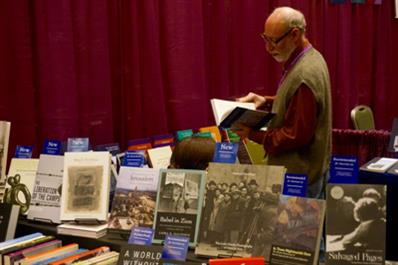