The Best in Jewish Films and How to Teach Them

The film program continues to evolve. Last year we experimented with the format, dividing the program into two parts: evening screenings and daytime pedagogical sessions. This year we experiment with the content. Along with the feature-length films and documentaries, we will be screening a series of shorts.

Short films are not widely circulated and are rarely seen in theaters and festivals. As a result, professors are less likely to know about them, even though they are the most useful films in the classroom. With that in mind, we curated a program of international shorts combining entertainment and comedy with serious and even tragic subjects, each of which can be used to trigger an in-class discussion or open a public program. Several of the films we selected are streaming online for free, making them accessible to students and faculty. But please contact the filmmakers and distributors for public performance rights (contact information is included in the program).

We will open the program with two comedies: the first is an episode in a Canadian web-series Yidlife Crisis, with the dialogue entirely in Yiddish. The series’ irreverent humor comes from the banter and kvetching of two Montreal hipsters, best friends and debating adversaries. The second short, 5 Minutes of Your Time, is a dark romantic comedy set in Tel Aviv on the eve of national annihilation. This screening is the US premiere of the film.

Moving from comedy to tragedy, the program continues with a US-Ukrainian production Mother. Set in the Nazi-occupied Ukraine, this film brings to light a rarely seen side of Holocaust history.

In the Footsteps of Regina Jonas also deals with tragic history. This American production pays tribute to Regina Jonas, the first female rabbi, who was ordained in 1935 and died in a Nazi camp. The film highlights her inspiration to contemporary female rabbis.

Another American film in the program is Wandering Rabbi, a sympathetic and humorous look at a young traveling rabbi, on a journey through the American South.

In the longest of the shorts, the Israeli thriller Enta Omri, an IDF unit comprised of both Jewish and Arab soldiers arrives at the army base on the Syrian border, which seems to be abandoned. The action starts when they discover that they are not alone.

The program of feature-length films includes drama Baba Joon, and two documentaries, Aliyah Dada and Café Nagler, which are equally international in scope. Baba Joon, the first Israeli movie in Farsi, is a coming-of-age story set in an Iranian-immigrant community in the Negev. The Romanian Aliyah Dada brings to life the rich and tragic history of Jews in Romania over 130 years, drawing on avant-garde visual style. Café Nagler, an Israeli-German co-production that is part personal narrative and part cheeky mockumentary, juxtaposes the nature of evidence and the power of family story. Each of these films will be introduced by a relevant scholar.

Continuing a successful debut last year, the Film Committee will offer a pedagogy session, dedicated to opportunities and strategies for using film in the classroom (developed in collaboration with the Pedagogy Division). This year’s focus will be on Israel Studies. The session will offer hands-on, practical demonstrations suggesting ways in which to select and present a film (or a film clip), situate it in the context of accompanying readings, and facilitate classroom discussion.

The first presentation, by Olga Gershenson, will suggest ways of teaching about competing Israeli and Palestinian narratives through film pairings, using as an example an American blockbuster Exodus (1960) and an international art film Kedma (2002). Sara Horowitz will demonstrate how to use the 1964 Israeli hit Sallah Shabati to open up conversations about evolving representations in cinema and popular culture, including stereotypes of ethnicity, race, and gender. Dalit Katz’s presentation on an Israeli comedy Zero Motivation (2014) will show how contemporary films can foster better understanding of Hebrew and Israeli cultural specificity. Collectively, panelists will create a useful toolbox for instructors of courses in the field of Israeli history and culture.

Please join us at both the film screenings and our pedagogy session. We look forward to hearing which films that we suggested earlier you found useful in your classroom or public programming, and what kind of films you want to see in the future.

Olga Gershenson is chair of the AJS Conference Film Committee and professor, Judaic and Near Eastern Studies and Film Studies at the University of Massachusetts-Amherst.
Join the AJSDonate 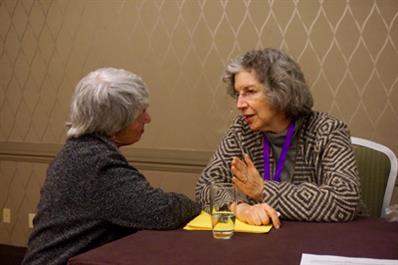