The first thing I'd tell people coming to the Association for Jewish Studies' annual conference in December for the first time is that if you're not sure where you'll fit in, you'll fit right in.

The field of Jewish Studies is, of course, riotously interdisciplinary; relatively few of the people who show up at the AJS conference, even those of us who go reliably every year, have PhDs in Jewish Studies, or teach primarily in a Department or Program of Jewish Studies. So if you're not sure that you're quite "Jewish Studies" enough, or if you feel, as you browse the conference program, that a lot of what you’re seeing lies far afield from your own interests, you'll be in excellent company. The conference attracts a motley assemblage of classicists and postmodernists, anthropologists and archaeologists and artists and theologians. (To paraphrase an old joke: two conference attendees, three disciplines.) So look for the people speaking your language (literally or figuratively), and don’t worry too much about the rest.

To graduate students and others who are new to the large conferences put on by professional organizations, in general, I’d suggest keeping in mind that at a conference like this, socializing really is work. I remind myself this, every year, and only in part to assuage the guilt I feel for being away from my spouse and kids for several days, spending a lot of it chatting over coffee or beer and catching up with people I really like and talking about ideas that fascinate me: it doesn’t always feel like work, you know?

As a social event, the AJS conference is big enough that there will always be new people, and to ensure that nobody knows everybody, yet it is small enough so that it fits into a single hotel (unlike some other unpleasantly gargantuan academic conferences I could name). After attending AJS for a couple of years, you get to the point where you start to recognize a lot of the faces. Here’s how I would advise people to make the most of it. Even if you missed the call for the new AJS mentorship initiative, or if you’re too senior to feel like mentorship of this kind is a good fit for you, you should email scholars you admire a couple of weeks in advance of the conference (i.e., now!) and ask for fifteen minutes for a coffee. They may genuinely be too busy, so don’t take it personally if they demur, but most will be able to find a few minutes to talk. Come prepared with questions and genuine praise for their work and you'll be well-received. That’s not to say that you should “network” (or, frankly, use that noun as a verb, ever): it’s to say that part of the pleasure of the conference is getting to meet people whose work matters to you.

One last request, for all attendees: there’s nothing like a conference to get gossip flowing, but watch it. Aside from the prohibition on rechilut (which does not seem strictly observed in academia generally, and certainly not in Jewish Studies circles), think pragmatically: unless you’ve traveled quite far from the conference hotel, there’s likely to be an AJS member in every elevator and around every corner, and they may not be wearing their conference badges, either. And it’s more likely than not that the person who overhears you will happen to know the person who you’re just about to witheringly disparage. So if you feel compelled to share the news of someone’s faux pas, or inquire about so-and-so’s recent scandalous whatever-it-was, do it behind closed doors or somewhere you’re certain is private.

Josh Lambert is academic director at the Yiddish Book Center and visiting assistant professor of English at the University of Massachusetts, Amherst. 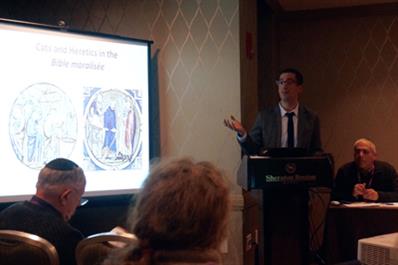