Above: Detail from Christy Daboub in WOMEN, created by Nicole Bindler with Diyar Theatre. Photo by Mohamed Radwan.

I was raised in a non-Zionist, secular, leftist Jewish household without ties to Israel, so when Bonnie, my college roommate, returned from a semester studying in Ramallah, I had nothing but curiosity about her Palestinian host family living under occupation. I did not know at the time that the photos and stories she shared with me would catalyze almost two decades of activism and wrestling with hard questions about how to practice solidarity with Palestinians with integrity. Both finding ourselves living in Boston after graduation, Bonnie invited me to join a Palestinian folk dance (Dabke) group called Zaitoun, composed mostly of Arab Massachusetts Institute of Technology students from various countries. We performed at an antiwar protest in 2003 for an audience of 30,000 people on the Boston Common, which exhilarated me. However, earlier that day, a few passersby spouted anti-Arab racist slurs at us as we danced in the march. I realized viscerally through that experience how much I had taken my white privilege for granted as an assimilated, white-presenting, Ashkenazic Jew. While nothing like the daily assault that people of color face in the United States, this incident gave me a glimpse of what it feels like to be subject to racism and continues to propel me in my work. 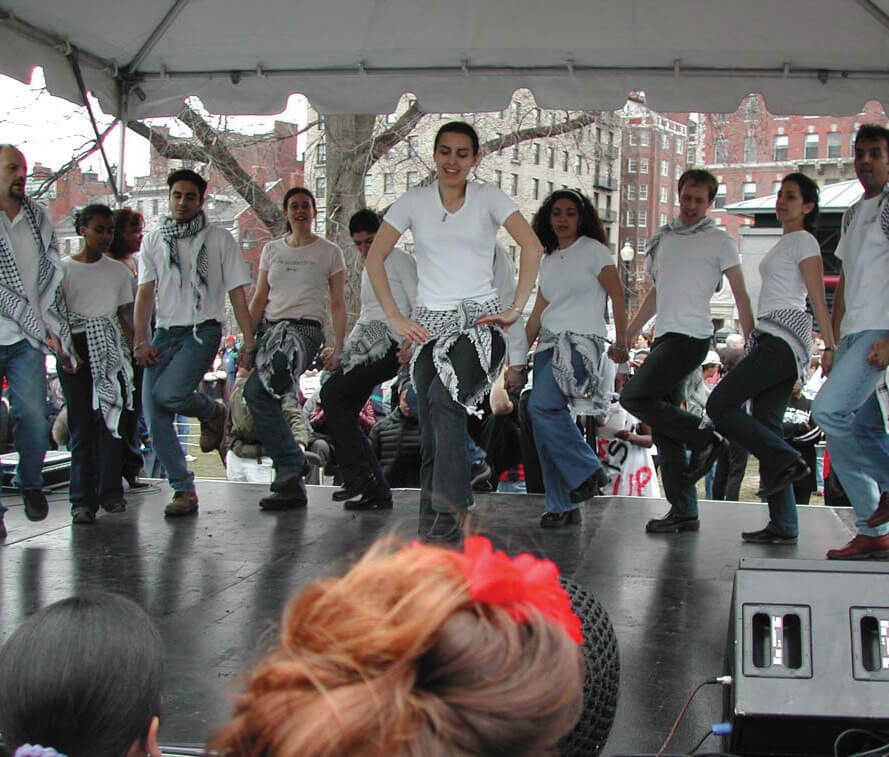 I have since worked with a number of Palestine solidarity groups, both Jewish-led and Palestinianled. I remain committed to this work because of the ongoing, worsening conditions that Palestinians face–– on both sides of the Green Line and/or as exiles who are unable to return to their historic homes––and the reality that resisting the occupation is still taboo among many self-identified leftists who are committed to justice and equity regarding every social issue except for Palestine. This tendency prevents true intersectionality in many leftist movements, and often perpetuates the conflation of Jewish identity with Israeli nationalism, which is reductive and problematic.

I have focused my Palestine solidarity organizing primarily within the field of dance in order to address the omission of Palestinian dance artists in our field, and because I believe that it is most effective to do social change work within the communities that we are already embedded. Additionally, looking at the ways that the occupation has played out in the field of dance can give useful insight into how cultural erasure is one way that the occupation is perpetuated.

There is disproportionate support for Israeli dancemakers through Israel’s positive image-building program, Brand Israel,i yet there is no comparable support for Palestinian dance-makers, owing to the ways that the occupation prevents a viable Palestinian economy. This financial reality––plus the fact that the State of Israel restricts freedom of movement for many Palestinians––amplifies the voices of Israeli artists, and eclipses the work of Palestinian artists to such an extent that many international dance presenters are not aware of the dance work currently being made by Palestinians. For example, according to events listed on their Facebook page, the American Dance Festival has featured at least one Israeli choreographer or company in their summer festival––the largest in the United States––for the past four years, whereas they have presented no Palestinian choreographers.ii

In 2015 I traveled to Bethlehem to cocreate an eveninglength choreography with three dancers from Diyar Theatre: Dima Awad, Christy Daboub, and Hala Issa (whose role was later performed by Ghadeer Odeh). The dance, called “WOMEN,” contains images and ideas about women living under occupation in Palestine: uprooted olive trees; rocks thrown and used to represent destroyed Palestinian villages; bowls of water as metaphors for water scarcity and the sea they cannot visit; and Dabke danced to the sound of bulldozers.

When I left the region, my Palestinian colleagues and my Jewish Israeli hosts in Tel Aviv gave me nearly identical wallets as goodbye gifts, both presented to me as authentic objects from their cultural traditions. I was reminded of Lawrence Davidson’s term, “cultural genocide”: “The endgame here is that the conquered land will no longer be popularly identified with the culture and traditions of those who were once native to it. Instead, their culture will be replaced by that of the colonizer … sometimes the colonizers will appropriate elements of the native culture as their own.”iii 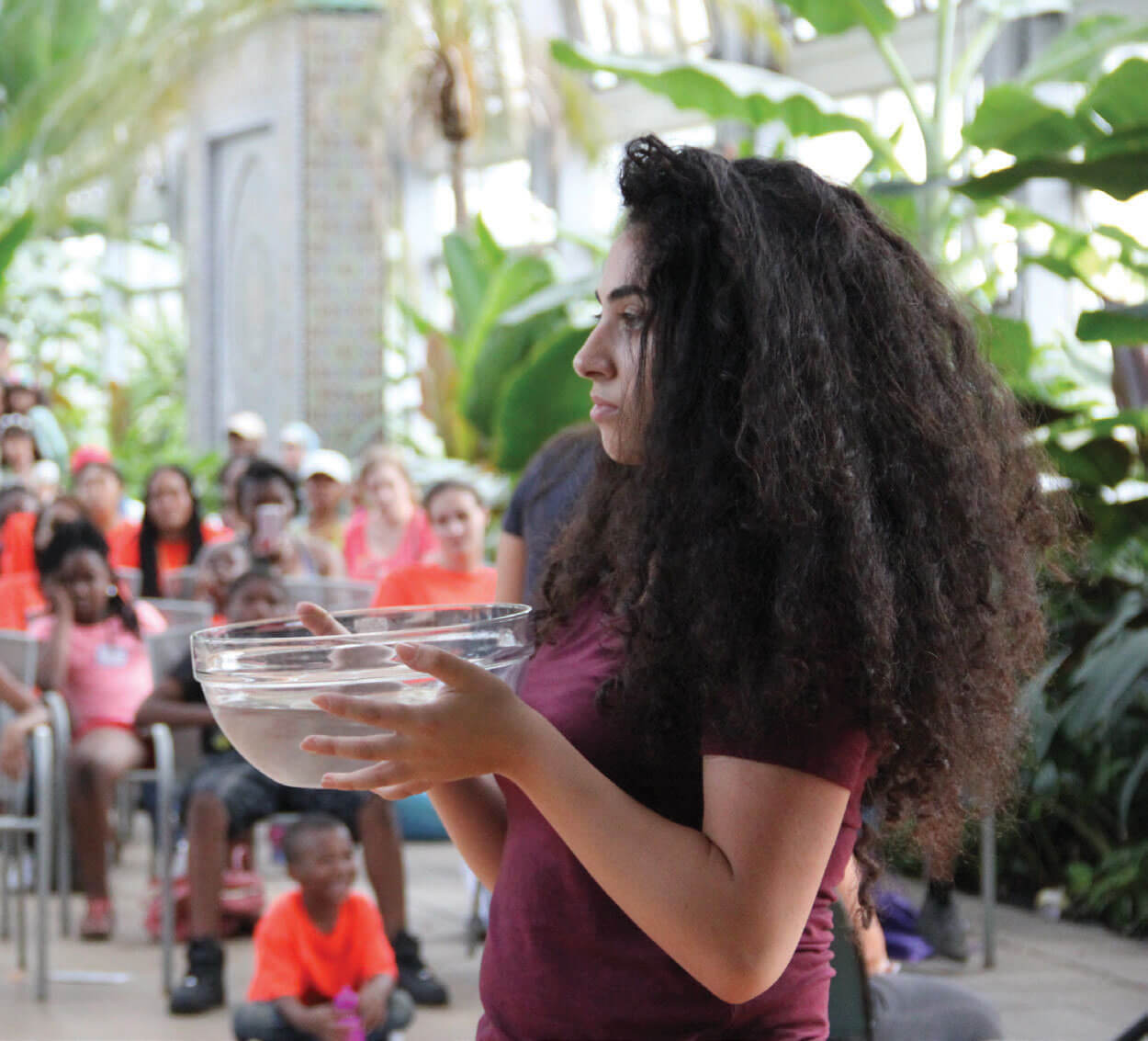 This instance of cultural appropriation with the two wallets was one of several complications in my collaboration with the Diyar dancers. In 2017 I raised money to bring them to the United States to perform the piece in five different cities. The Philadelphia Dance Journal review of our performance solely credited me for work we explicitly billed as a collaboration.iv It was too easy for the author of that review to read the dance through the eyes of a white US citizen, in spite of the fact that she attended a rehearsal to witness our collaborative process.

I was honored to have the opportunity to collaborate with these dancers, but troubled by the power dynamics inherent in the process, as a US citizen with access to financial resources, audiences, and performance opportunities. I have refocused my advocacy toward disseminating ideas from Palestinian choreographers’ work in my writing and talks in artistic and academic settings, and away from artistic collaborations, as I grapple with questions about how I can be in solidarity with Palestinian dance artists without perpetuating the colonialist tendencies of some dance critics, historians, and curators to present the white Westerner as the center of all stories. 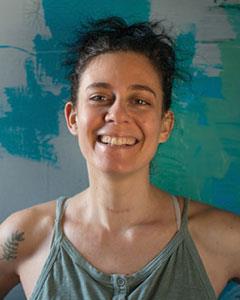 NICOLE BINDLER's performance work and teaching have been presented at festivals and intensives throughout the U.S. and internationally, and she has been a faculty member and guest lecturer at universities throughout the U.S. She has written extensively on dance and somatics and currently serves on the Earthdance Diversity, Equity, and Inclusion Committee.

i Nathaniel Popper, “Israel Aims to Improve Its Public Image,” The Forward, October 14, 2005.