Above: Detail from photo of Sephardic Museum (Museo Sefardí) in Toledo, Spain. It is a fourteenth-century building, originally the Sinagoga del Tránsito or Sinagoga de Samuel ha-Levi. Courtesy of the author.

One of the challenges of teaching courses on Spanish imperialism and the conquest of the Americas is the extent to which they can seem so familiar and simultaneously alien to early twenty-first-century students. This is a time when many students are sensitized to the complexities of race and various ways it might intersect with religion, geography, capitalism: it is almost a grab bag of buzzwords that in the best cases generates fruitful debate and analysis. It can be hard for students to see how those threads come together over time, and how the remote origins of our current world order might help us understand the imbrication of race, religion, and nationality. This can be particularly true in helping students bridge the gap between the late medieval world of fifteenth-century Spain and the purportedly modern world of the sixteenth-century Americas, where, for students, “race thinking” seems to be a novel kind of social discourse. The relationship between medieval antisemitism and early modern racism get lost in that geographic divide. The Alhambra Decree that led to the expulsion of tens of thousands of Spanish Jews is thus reduced to a coincidence: what a curious accident of history, the story goes, that on the day Columbus set out for the New World he was forced to leave not from the port of Cádiz, the obvious choice for an Atlantic journey, but rather the less advantageous Palos de la Frontera. 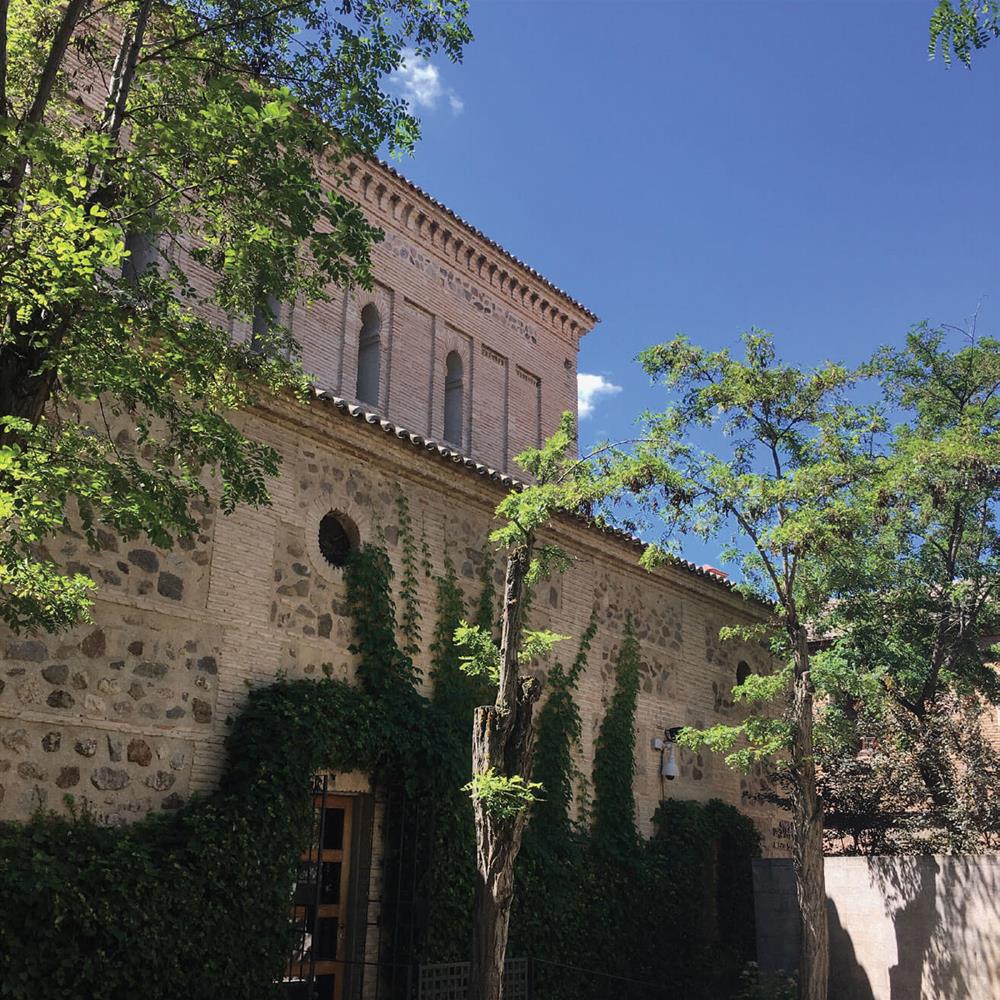 Sephardic Museum (Museo Sefardí) in Toledo, Spain. It is a fourteenth-century building, originally the Sinagoga del Tránsito or Sinagoga de Samuel ha-Levi. Courtesy of the author.

The details of this historical convergence matter, not only for what they might suggest to us about the cultural realities of 1492, but also for the material realities that narrative elides.i If the Niña, the Pinta, and the Santa María could find no berth in the ancient port, it was a product of the fact that the docks of the ancient city were packed with boats meeting the deadline of expulsion. The port was brimming with the literal bodies of Sephardim being pushed into the ocean and on the various trajectories that would carry them away from the only home they had ever known. These bodies matter, of course, if we hope to understand the role antisemitism played in this most crucial of years for the Western imagination. They also matter if we ever hope to understand the central role that antisemitism would play in the development of European “race thinking.” Columbus’s famous caravels were as much a part of the Jewish expulsion as those boats carrying mourning passengers to the furthest reaches of Europe and the Ottoman Empire. They carried to the New World a sense of difference deeply rooted in a kind of embodiment that seems distant, less legible to modern readers than we might imagine. 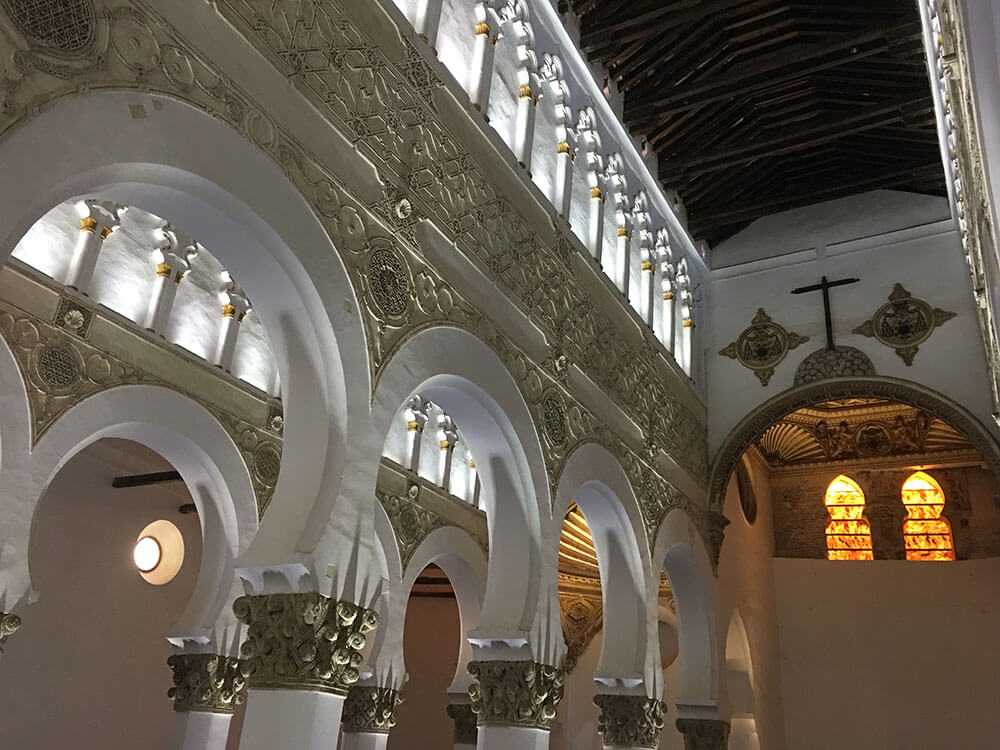 Santa María la Blanca, a former synagogue in Toledo that was later made a church and is now a museum. It is possibly the oldest standing/extant synagogue building in Europe, although it hasn’t been used as a synagogue since the early fifteenth century. Courtesy of the author. 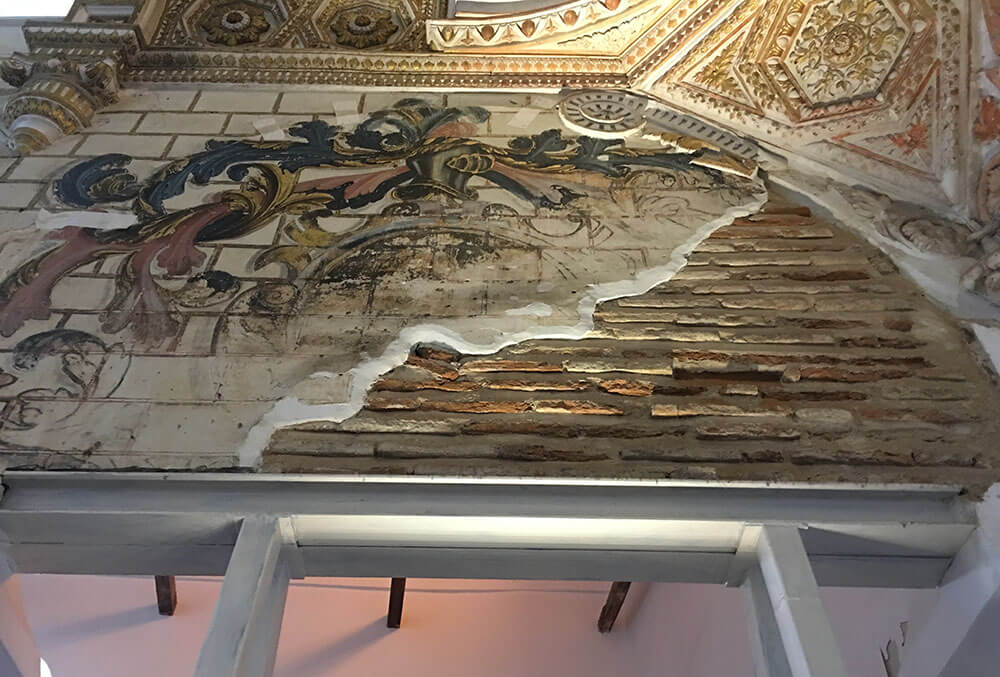 This photo shows the overlay Christians applied to Santa María la Blanca, obscuring the original bricks of the synagogue. Courtesy of the author.

In her influential study of the relationship between inquisitorial politics and the emergence of modern ideas about race, the late María Elena Martínez reminded us of the way antisemitism has been, since time immemorial, imbricated with ideas about faith and the body and how those bodies might imply a kind of inheritability of certain traits.ii Most clearly exemplified in the way Spaniards allegorized the importance of “blood” and purity, Martínez’s account beautifully peels back the layers of how the body was seen to contain the fluids in which flowed belief, from blood to the mother’s milk that fed heresy intergenerationally. The relationship between biology and belief, between what the body contains and what lies in the spirit, is a language of bigotry that might seem familiar in its broad brushstrokes but more difficult to parse in the details. Indeed, students perceive the bigotry of biological theorizations of ethnicity, but do not grasp readily the way that religion, ethnicity, and incipient notions of race converge on the site of the body. Martínez connects purity of blood to the casta system, a later, New-World conceptualization of race in Mexico. Suggestive as that is, it seems to me that not enough attention has been given to the way transmissibility might be reimagined as a question not of biology per se, but rather intimacy, proximity, and familiarity. The strangeness of early modern notions of race lies, for me, precisely in the way bodily proximity itself was understood to be racialized.

Spaniards transformed religious belief into a question of bodies, but they did so in complex ways. Conversos proved threatening to the antisemitic imagination not only because of allegorical ideas about blood, but also because of the way bodies were defined by practices and rituals, the way they literally moved through space. Performance Studies has given us a language to talk about the way that recursive, quotidian behaviors make meaning and generate subjectivity precisely through a practice, via externalized, observable behaviors. Bodies moving through space do not mean anything or hint at a hidden meaning; instead, they generate that very thing we assume they signal. In other words, the performance goes beyond phenomenology and, on some basic level, produces a kind of being. This lens helps us re-view(?) embodiment as a more complex and layered phenomenon than the concept of ethnic or “raced” bodies would suggest. Most startling about this kind of performative, bodily understanding of religion for early modern Spaniards is the way that it sits at the intersection of a version of embodiment that is biologically racialized and the intimacy of familial and quotidian practice. For the Spanish antisemite, the vicissitudes of his prejudice turn on that axis where faith moves toward practice and away from belief, where bodily proximity becomes the groundwork for a familial intimacy that so frightens the nascent imperial imagination that it packs it onto boats to carry it away.

As a metonym for modernity, those overflowing ships will go from carrying people across the Mediterranean and away from the heart of empire to packing them in and ferrying them to lives of servitude across the Atlantic. Rather than the capstone to medieval antisemitism and another in a long line of Jewish expulsions, I want students to understand the Sephardic Diaspora as part of the birth of modernity, as part and parcel of the racist legacies that would subtend the establishment of early capitalism and Western imperialism. Understanding the extent to which early modern antisemitism was rooted not only in questions of faith but also in mutable forms of embodiment like racialization and the physical practice of ritual has helped my students engage more dynamically with how racism, religious bigotry, and imperialism intertwine. 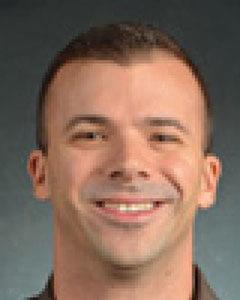 i María Rosa Menocal describes the port of Cadiz on the eve of expulsion in her book, Shards of Love: Exile and the Origins of the Lyric (Duke University Press, 1993).