A familiar sight on the first day of school at Davidson College in Davidson, North Carolina: at sixty seconds to the hour, eighteen expectant faces are glancing up at me, waiting to start class. For me, the responsibility of teaching is never more poignant than during that one minute before the semester starts. No matter how much you prepare, something difficult, new, or puzzling will invariably pop up. Even the most airtight syllabus must be adjusted or rearranged, and each student brings a cornucopia of unique elements to the table—endless variables that color the collective experience for better or worse. Teaching Jewish Studies at small liberal arts colleges in the South brings these expectations into even sharper relief. While some good practices may be universal, there is a need to be even more creative when teaching on campus with little prior investment in Jewish topics.

… one student confided that he “didn’t know that Jews still existed.”

Davidson College, emblematic of the small, southern liberal arts college, presents a challenge when it comes to Jewish Studies because of relative scarcity of Jewish-related coursework in the past. Thanks to the dialogue that the recent Jewish Studies initiative has brought to Davidson, some students have been willing to admit that they had thought “all Jews wear black hats” and “the Jews were just from the Bible.” Perhaps even more surprisingly, one student confided that he “didn’t know that Jews still existed.” In environments like Davidson, where Jewish Studies hasn’t really been on the radar, confusion and misunderstanding are widespread, but regardless of the school or student demographic, the questions for Jewish Studies educators are similar: How do we teach Jewish Studies to an audience who doesn’t always recognize its importance? What is the role of educators in combating apathy, hatred, and perhaps more than anything else, enrollment quotas? How do you create a permanent home for Jewish Studies where historically there was none?

These questions present great challenges with no easy answers, but only in the past few months, there has been some movement in terms of student support. In a tweet response to a Davidsonian article, a History professor, Ilana McQuinn, @IllMcQ, noted that in fall 2019, 24 students were enrolled in Jewish Studies courses, whereas for spring 2020, 112 students were enrolled.

The relative success in enrollment of these classes is in part due to three different pedagogical strategies that the Jewish Studies faculty at Davidson have recently employed to optimize student experience, raise awareness, and garner support. Although these qualities could apply to any school or any discipline (and by no means represent an exhaustive list) they seem even more relevant for a grassroots effort in the South.

In contrast to teaching in a campus environment that has a lot of existing Jewish affinity, at small liberal arts colleges in the South, educators must be willing to be flexible with their plans. It’s risky to assume any prior knowledge. We learned at Davidson that depending on the student’s high school, they may not have covered the Holocaust, because it’s not included on the AP exam. Students don’t come to college expecting to take Jewish Studies if it has rarely been included in the course catalogue. Specialists in the field must be able to think on their feet and take the risk of being the first person to discuss controversial, knotty topics with their students. For example: What does it mean to be Jewish? Is being a Jew a religion, a culture, a race, or something else? Are light-skinned Jews white? What’s the root of the conflict in the Middle East? These questions are difficult for any educator, but if you are teaching in an environment where you are one of the first to tackle these topics, these questions can carry a sense of added responsibility.

Jewish Studies is often most accessible when introduced through intersectionality. For example, a Davidson professor in Anthropology, Tamara Neuman, shared that her discussion on Jewish Diaspora has been enriched by a broader conversation about contemporary migration issues. In my course, “Jewish Latinx Literature,” I teach texts that are written by authors who write in Spanish and also identify as Jewish. While there are some Jewish-specific themes, larger concerns like the Latinx experience in the United States and colorism in the Caribbean are applicable to the broader Latinx experience. Contextualizing Jewish Studies within themes of the civil rights movement, discussing texts by Jews of color, and exploring little-known narratives of resistance during the Holocaust are some avenues to demonstrate that Jewish Studies is inherently interdisciplinary and multifaceted, appealing to a wide range of disciplines and interests. 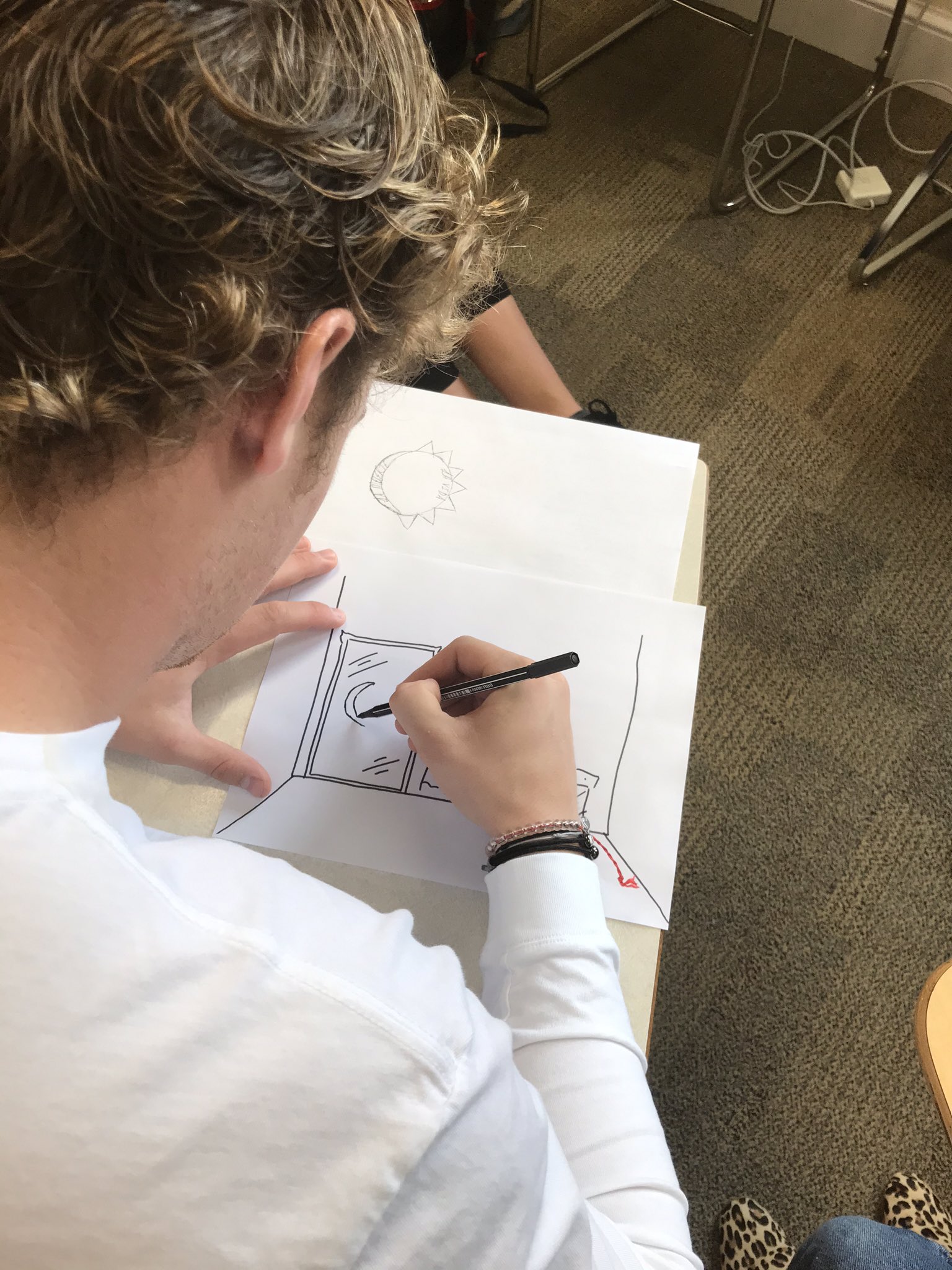 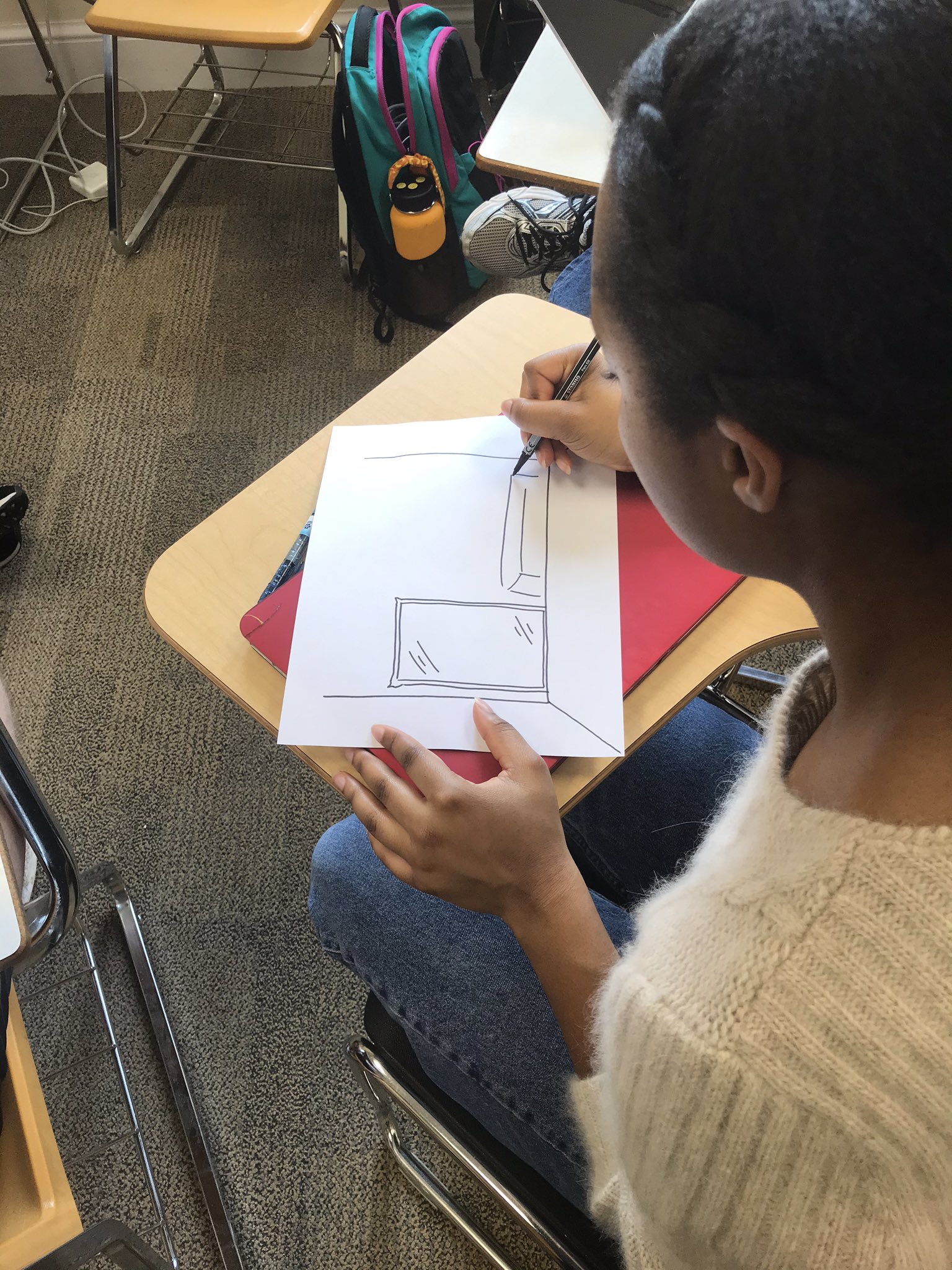 Students in my course we often asked to respond to the texts by drawing. In this case, students had to share the same drawing that represented the poem and negotiate how it would be designed. Here, students work on collaborative drawings in response to Jewish Argentinian poet, Alejandra Pizarnik. Photos courtesy of the author.

A college campus, by definition, is a melting pot of people and ideas; some students are open-minded advocates of diversity, others are perpetrators of discriminatory bias, and many more are bystanders unaware of the issues of equity at stake. Teaching Jewish Studies effectively in a new environment requires a welcoming tone that invites conversation, questions, and dialogue. A safe space must be created for these interactions in order to establish equitable access. Davidson sophomore Catherine Cartier ’23 said that before the initiative, it wasn’t really possible for her to learn about Jewish topics. Dalia Krutkovich ‘21 also concurred that Jewish students at Davidson hadn’t felt equally represented or supported, particularly in light of challenging current events like the Or L’Simcha/Tree of Life shooting in 2018.

In order for Jewish Studies to make a lasting, meaningful impact, educators must also encourage interaction outside of the academy. The fact that the Jewish community in the South is relatively small speaks all the more to the need for institutional interest and support. Community partnerships with outside organizations can help small colleges offer additional cultural experiences and connections with the community in a diverse space. President of the Levine Museum of the New South, Peggy Brookhouse, said it best: “One needs to create space for people to discover and dialogue. The promises of the South are not yet realized.” 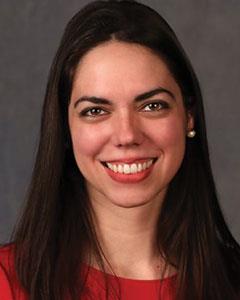