“But let justice roll down like water, righteousness like a mighty stream” (Amos 5:24). According to the biblical book that bears his name, the prophet Amos thundered these words in the eighth century BCE. Nearly three millennia later, they reverberated on the lips of Martin Luther King Jr. during the civil rights movement. For King, as for many Jews and Christians, they represented the spiritual zenith of biblical prophecy: its protest against the injustice of the powerful. Not for nothing has the word “prophetic” become virtually synonymous with social critique. This critique appears in nearly every prophetic book.

However, this inspiring verse is only part of the story. The beginning of the passage strikes a different tone: “I hate, I abhor your festivals!” Amos screams in God’s voice (Amos 5:21). Israel showers God with worship while ignoring or exploiting the vulnerable of society. Most prophetic calls for justice share this context, and it is theologically essential. The point isn’t simply that justice is good. It’s that justice is the core of genuine service to the God of Israel, over against obvious (but misleading) alternatives like worship. By thinking that lavish offerings get them off the hook, the Israelites haven’t simply come up short. They’ve damningly shown that they don’t understand anything about the God they claim to serve.

Does this mean that even critical scholarship on prophetic protest is doomed to devolve into covert apologetics?

The prophets’ protest against prioritizing ritual over justice doesn’t always play much of a role in Christian justice work. However, since antiquity itself, it has played an important role in Christian anti-Judaism. It’s easy to see why. Early Christians saw faith in Christ, including a commitment to justice, as the replacement for myopic Jewish ritual. The prophets were the harbingers of this shift. The Epistle of Barnabas, an early Christian text, captures this nicely: “[God] has made it clear to us through all the prophets that he needs neither sacrifices nor whole burnt offerings nor general offerings.… He has abolished these things [to make way for] the new law of our Lord Jesus Christ” (Barn 2:4–6).

Unsurprisingly, Jews have generally disagreed: the prophets rejected corrupted ritual, not ritual itself. Rashi wrote that sacrifice is abominable when practiced alongside transgressions. Abraham ibn Ezra clarified that God hates sacrifice when it becomes crudely transactional. Yom Kippur features a reading from Isaiah’s call for a “fast” of justice, not ritual self-affliction—even though the day still requires such self-affliction.

Academic Bible scholars study prophetic protest for insight into the history of Israelite religion. One would hope that they’d manage to transcend Jewish-Christian polemic. Alas, they’ve ended up divided along the same lines: whether the prophets’ critique of worship was absolute (Christian) or contingent (Jewish). It turns out that the texts themselves provide little basis for litigating this. If condemnation of ritual corruption is sufficiently passionate, it might sound like condemnation of ritual altogether—and prophetic protest is nothing if not passionate.

Does this mean that even critical scholarship on prophetic protest is doomed to devolve into covert apologetics? Not necessarily. The prophets’ own views are indeed out of reach. But this problem itself suggests a solution. We don’t directly see the prophets protesting worship. We read about them doing so, secondhand, in a book. What if we took this textual medium seriously? What if, instead of straining to hear Amos or Isaiah, we listened more closely to the anonymous scribes who curated and canonized their words?

Nowadays, writing has little connection with official power. Activists challenging society from its margins can reach thousands with just a social media account and at no cost. It’s therefore tempting to imagine Amos tweeting at the priests and watching the “likes” roll in (like a mighty stream). This fits with a picture that has long dominated popular and academic imaginations alike: a diametric opposition between charismatic but powerless prophets and uncharismatic but powerful priests. However, most scholars now believe that the scribal production of the Bible was more complexly situated between these two theoretical extremes. Large-scale scribal activity—the sort necessary for the creation of entire scriptural books—was probably associated with the centralized power of the Temple. This is because of the substantial material and logistical considerations involved—quite unlike today’s internet-enabled activists. The very fact that a given biblical book became part of the canon implies that it passed through the hands of scribes who, at a minimum, were trained in some connection with the Temple establishment. This makes sense as the background for, say, the extensive ritual in the Torah. However, it’s strange to imagine a scribe on the priestly payroll sitting in the Temple as he copied out “I hate, I abhor your festivals.” Yet this is exactly what the history of scribal activity implies! Prophetic protest was preserved under the auspices of individuals with ties to the very institutions that it targeted.

This social reality suggests that the canonical preservation of ritual alongside the prophetic critique thereof might be more theologically intentional than theories of diametric opposition would have it. Scribes with ties to the priesthood probably didn’t see the prophets as fundamental critics of priestly ritual. They’d be sawing off the branch they sat on. At the same time, we shouldn’t dismiss these scribes as shills for the establishment. Presumably, they were capable of criticizing inadequacies or failures in their own institution. Their incorporation of prophetic protest into the canon may be understood in just this way. The scribes saw it as a valuable recognition of a real danger for worship to displace all other religious commitments, including justice. In moments where this might happen, the prophets would be there—a built-in system of theological checks and balances. The scribal integration of ritual and prophecy, of power and protest, expresses a cohesive vision of religion in which these seemingly opposed elements interact constructively.

Is this reading still stuck in Jewish-Christian polemic? It does align with the typically Jewish view. However, there’s a crucial difference. I have no pretense of recovering what the prophets “actually” thought. Were I to meet Amos, I’d be prepared for the possibility that he’d say, “That Jesus guy! He understood me.” Maybe the prophets did want justice to replace ritual. All I’m saying is that the earliest interpreters we can access—those who preserved the prophets in the first place—show that we don’t need to read them that way. Traditions of seeing prophetic protest as a dynamic part of Judaism, not a rejection of it, go back to the Bible itself. This should both reassure and empower contemporary Jews doing the hard work so that justice may indeed roll down like a mighty stream. 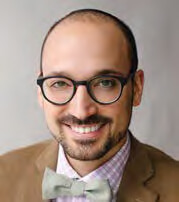 ETHAN SCHWARTZ is assistant professor of Hebrew Bible in the Department of Theology and Religious Studies at Villanova University.