A Protest against the JCC Conception of Jewish Studies

Jewish Studies mostly embraces Salo Baron’s famous exhortation against a “lachrymose conception of Jewish history.” Baron worried that Jewish historiography was too dedicated to the cliché of Jewish suffering, rendering it blind to Jewish joy and achievement; and indeed, Jewish Studies sometimes still likes to pat itself on the back by ritually retelling the story of its auto-emancipation from the lachrymose, a kind of fort/da of celebratory self-legitimation. But I’d like to draw attention to a more insidious narrative contaminating Jewish Studies discourse, active at least since Jewish Studies has consolidated into a professional identity, a more-or-less coherent field—that is, over and above a confederation of independent disciplines—in the last generation: what I call the “JCC conception of Jewish Studies.”

Luckily, I then saw the CFP for this issue of AJS Perspectives, an opportunity to leverage my rage for professional achievement.

With its other trials, summer 2020 brought an experience with a Jewish Studies journal that exemplifies this paradigm. I was asked to write a book review, but when I told the editor about my significant criticisms of the book’s methodology and implied theorization of Jewish Studies practice, I was told “the journal can’t afford that kind of controversy” and that the review had to be “productive,” which was clarified as “we’d rather not publish takedowns.” The editor wrote, “If you find the whole book offensive and retrograde then it’s probably better to pass the review on to someone else....I know there is value in criticism, and for its ability to show how things don’t work, but [journal name] as a whole aims to also put forward models for how things should work.” I inwardly steamed, and sighed, noting the conspicuous if implicit opposition between “show[ing] how things should work” and not “find[ing] the whole book offensive and retrograde”: it’s not at all clear why the set of things that show how things should work” should be assumed to never intersect with the set of things that “show how things [that are “offensive and retrograde”] don’t work,” but given the expression of anxiety about publishing “takedowns,” it’s obvious that in the editor’s ethicoprofessional calculus, “the whole book,” crucially, also necessarily means the author. This professional performance of the intentional fallacy adapted for the world of academic publishing shines light on the norm that productive be subordinated to laudatory. In any case, we agreed that the journal would find another reviewer, and I wondered why the will to affirmation is rarely explicitly, or perhaps positively, admitted. Luckily, I then saw the CFP for this issue of AJS Perspectives, an opportunity to leverage my rage for professional achievement.

…because of the field’s bad-faith identity problem, scholars interpellated in Jewish Studies can too easily see the necessarily antagonistic negative labor of criticism as bad manners…

Like most “studies” formations, Jewish Studies includes many academic disciplines and aggregates several not-necessarily-compatible methodologies; accordingly, the field obviously relies on a structuring concept of Jewish identity to unite its endeavors. I say “obviously,” but in fact Jewish Studies devotes remarkably little energy to analyzing how it so structures itself (and possibly how it operates more generally—even granting its celebrated escape from the lachrymose). Most troubling, despite sporadic lip service paid since the 1969 founding of the AJS, there has been little sustained critical effort to disambiguate the concept of identity organizing the objects of Jewish Studies—the Jewish “stuff” Jewish Studies scholars address—and the concept of identity organizing its subjects—the scholars affirming themselves practitioners of Jewish Studies, most of whom can claim by currently accepted metrics to be Jews. This elision can end up suppressing intellectual dispute, whether methodological or theoretical, in favor of a kind of professional sholom bayis that has recently taken root. When the line between a critic’s ideas about their object and their ideas about their self blurs—even, maybe especially, as registered by others—the old chestnut about not having anything nice to say takes on (even in the best of circumstances) a kind of earnest ethnological weight that, in a victory for reactionary intellectuality, can masquerade as professional decorum: one might (ideally) disagree with another’s claims, but it’s a lot harder to justify disagreeing with another’s sense of identity. Leaving negativity at the door might sound good in the abstract (and indeed may respond to a very real history of inequity), but, bromides about Jews’ predilection for disagreement aside, because of the field’s bad-faith identity problem, scholars interpellated in Jewish Studies can too easily see the necessarily antagonistic negative labor of criticism as bad manners, or worse, sinas khinam.

The problem is not simply that Jewish Studies often manifests as a club (I imagine this is common in academic fields); it’s that its habit of recognizing itself in its scholarly objects makes this insiderist affect a criterion of scholarly legitimacy, elevating self-referentiality (whose flipside is necessarily defensive disinterest in self-criticism) as an intellectual virtue. And this validating clubbiness metastasizes into a taboo against imagining Jewish Studies scholarship as anything other than producing, refining, and circulating historicist knowledge about Jews and Jewishness, themselves undertheorized concepts that, liberally and expansively imagined, are little more than the always recognizable spectral reifications of a keyword search. God forbid I object to ethnological historicism on its own terms, but as someone who went through the trouble of getting a PhD in literary studies, I feel honor bound to insist that thinking can take other forms.

A “glance” at Facebook while I was preparing this essay yielded a useful field-scape in someone’s announcement of a book review they’d just published. Though neither is scholarly, the book and review venue are intellectual and let’s say haute-popular (the review venue is in fact nationally visible and widely read); but the book is Jewish Studies-y, the reviewer is a Jewish Studies professor, and it’s predominantly Jewish Studies-ers who posted comments on the thread. Brass tacks: despite raising some respectfully submitted objections—the book’s likely prejudicially-motivated lapses of coverage, its underconceived ideas about Jewish canonicity, its author’s dubiously restricted intellectual-political imagination, etc.— the review redeems the book via the reviewer’s own particular affirmations. And the Facebook comments mostly repeat some variant of “great review; generous while still taking some issue with the book; good job,” followed by the reviewer’s responses peppily justifying the review’s reticence to go too far into the weeds. Nothing unexpected in the presumption that reviews, in the antagonism-quashing vocabulary of the New Academic Sholom Bayis, should be “productive.” Which would be fine, at least normal, except that what the book got wrong in these takes in fact amounts to serious contravention of current canons of political and scholarly responsibility, orbiting around the book’s repeating, if in sanitized form, the proclivities of the infamously reactionary Jewish Studies scholar, now known as much for their screeds in Commentary defending Trump for his Birchite Zionism as for their reactionary scholarship, who taught where the book’s author received their bachelor’s degree. To be clear, the Facebook commenters I’m describing here would I imagine mostly endorse my description of the book and its author’s teacher (if perhaps not my politico-poetic flourishes). And to be clearer, many of them are tenured. So we have a book that recirculates reactionary biases and blindnesses, a review that while pointing out some of these predispositions insists on being positive, and a bunch of Jewish Studies scholars who, despite challenging those prejudices, congratulate the reviewer. This arrangement serves the affective pleasures of being “in” a community or network, but not necessarily responsible scholarship. Have we learned nothing from Groucho Marx?

The review ends on an anodyne note: maybe this book, despite its flaws, can get people to think more highly of reading, and therefore of accepting nuance in these politically perilous times. It’s the backbone of the review’s positive tone, its—to use the term conspicuously repeated across many of the Facebook comments—“generosity.” But for shit’s sake, it’s a book review, in a book review section; this platitude is given. The celebratory site of this positive affective feedback loop is simply a cliché. It’s one thing for popular intellectualism to engage in Norman Vincent Peale–ism, but shouldn’t scholarship have more self-respect? Christ, if all I were after was compliments I’d go to a strip club with a pocket full of small bills.

What I tendentiously diagnose as the New Academic Sholom Bayis is certainly not the only affective modality of Jewish Studies intellectuality, but it’s indisputably ascendant. A long time ago Edward Said warned about the differences between disciplines and fields: while the former define themselves epistemologically and methodologically, the latter cohere otherwise, and can tend to elevate received ideas, practices, and communal protocols. When they begin to resemble guilds, fields like Jewish Studies can be intellectually perilous. Let’s ditch the JCC and fight more. 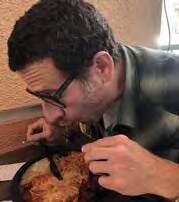 BENJAMIN SCHREIER is Mitrani Family Professor of Jewish Studies and professor of English and Jewish Studies at Pennsylvania State University. He is author, most recently, of The Rise and Fall of Jewish American Literature: Ethnic Studies and the Challenge of Identity (University of Pennsylvania Press, 2020), and, since 2011, editor of the journal Studies in American Jewish Literature (Penn State University Press).