A Protest Novel That Went Unheeded

It’s not controversial to call Susan Taubes’s Divorcing, first published by Random House in 1969 and reissued this October by New York Review, an autobiographical novel. Reviewers did so in 1969, and again, with increased sophistication, this fall. What’s less clear is what we should do, once we accept that the novel conveys unsavory truths about real-world figures.

The book tells the story of a fictional character, Sophie Blind, whose experiences obviously and straightforwardly line up, in many ways, with those of the novelist, Susan Taubes (1928—1969). Both were born in Hungary and moved to the United States. Both married a charismatic rabbi and Jewish Studies scholar: Sophie marries Ezra Blind, Susan married Jacob Taubes (1923—1987), author of Occidental Eschatology and The Political Theology of Paul, and famed mentor or influence on Giorgio Agamben, Marshall Berman, and Avital Ronell, among others.

In the novel, Sophie understands that her marriage defines her and makes her life easier, but Ezra is hardly an ideal husband. He cheats, exploits her, and—most damagingly—refuses to divorce her. “You have no reason to want a divorce,” he tells her. “You just want to break the marriage. Why? Are you evil? Are you bent on destruction?” “So that’s what you are. A bitch,” Ezra says, thinking further: “It’s a psychiatrist she needs. Or a lover, or a beating. Beat her blue.” Eventually, in a phantasmagoric trial sequence, Sophie, already dead, demands her divorce from a rabbinical court, and, after a series of testimonies (by her father, Ezra’s lovers, and other witnesses) the rabbis declare that “her divorce is granted, whether she is alive or dead,” and, lying in her coffin, “she is presented with a Bill of Divorce.”

The tragic and gruesome context in which one has to read the novel is that one week after it was published, Susan Taubes committed suicide. While such a series of events might be expected to have created a succès de scandale, elevating the profile of the book, the opposite seems to have happened: the novel received a little press, then quickly went out of print, and more or less disappeared, until this new reprint.

What relationship between art and life should inform the way we think about this novel?

One possible answer—a bad one—is to imagine a causal connection between the novel’s reception and the end of Taubes’s life. This has been common, even in recent reviews of the novel prompted by its reissuing, but the most succinct and blunt statement of this idea was a 1969 article in a New Jersey newspaper headlined, “Novel Panned, Author Suicide.” This isn’t a mistake only because it propagates a false narrative about artistic failure that ignores the realities of depression, mental illness, and suicide (although that is a major problem with it). It also isn’t really true, in the case of Divorcing: the novel hadn’t been panned, but reviewed respectfully. Even a widely cited, generally quite stupid and misogynistic review in the New York Times Book Review praised the last third of Divorcing as “tantalizing and coherent.”

What about the other link we might make between the novel and real life—the one that, at least after #metoo, feels obvious? Might the fictional husband character whose treatment leads Sophie to contemplate suicide repeatedly, culminating in scenes in which she is dead, be telling us something about the real-life Jewish Studies scholar whose ex-wife committed suicide in November 1969? Might we not posit that Jacob Taubes, if his conduct had been similar to that of Ezra Blind in the novel, bears some culpability for his ex-wife’s having “been despondent for more than a year” (according to the notes found in her purse after her death)?

None of this seems to have affected Jacob Taubes’ professional opportunities while he was alive, or his reputation after his death.

Indeed, while most articles about Susan Taubes’s suicide did not mention her ex-husband at all, Jacob Taubes has been reported to have insisted that he was, in fact, partly responsible. In a memoir, the philosopher Babette Babich recalls Jacob Taubes telling her in the 1980s that she, Babich, “looked ‘just like’ his former wife” who, “he declared with a strange satisfaction, as if it were somehow to his credit, had taken her life, walking into the ocean, as he put it, when he left her to marry” another woman. According to Babich, at least, Jacob Taubes not only seemed to have taken “credit” for Susan Taubes’s suicide, but also—like the fictional character Ezra Blind—he seems not to have taken at all seriously the contention, made explicitly and at length in Divorcing, that to be married to a man like Taubes could be so harrowing that death would seem preferable.

None of this seems to have affected Jacob Taubes’ professional opportunities while he was alive, or his reputation after his death. For decades after the publication of Divorcing, Taubes was employed as a professor at the Free University of Berlin, where he taught and mentored many students. Stanford University Press published translations of two of his books in the 2000s, calling him “one of the great Jewish intellectuals of the twentieth century.” He has been the kind of academic celebrity whom graduate students in Jewish Studies are supposed to have read and thought about and taken seriously.

Respectful studies and memoirs have tended either to ignore his personal life entirely, or briefly acknowledge that he was “sad and sick” before turning to focus on his philosophical and theological writing. What would it mean to say, instead, that the first and primary fact one should know about Jacob Taubes is that he was an awful husband who terrorized his brilliant wife until she committed suicide, and was proud of that?

That’s more than many people would be willing to say, on the basis of Divorcing, which is, of course, a novel. It is fiction; it is fiction even though, within it, Sophie says that the book she is writing is “not really fiction.” The book includes many scenes that cannot describe actual events, in which the dead speak, in which characters transcend space and time. It is fictional, which would seem to imply that it cannot function as testimony.

And yet, thanks to scholars like Leigh Gilmore, we also know that women who have testified about the misogynistic abuse they have suffered have been often been attacked verbally and physically, and that many women have understood that, because of those dynamics, they need to share information about abuse using means that protect them from such attacks, like whisper networks. And we also know that the genre of the roman à clef has, for hundreds of years, been one such venue, relied upon by women writers who have felt that they cannot otherwise tell the truth about abuses they have suffered at the hands of powerful men.

To be clear, I am not calling on anyone to “cancel” Jacob Taubes, and I’m frankly not sure what it would mean to cancel a religious philosopher who died twenty-three years ago and published relatively little. But I would be eager to see anyone translating, citing, or teaching Jacob Taubes’ work take seriously Susan Taubes’s claims about ethically despicable conduct he engaged in, especially as it is reflected in his work as a thinker, teacher, and influence on the field. 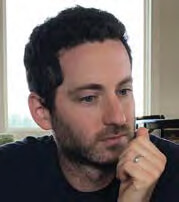 JOSH LAMBERT is Sophia Moses Robison Associate Professor of Jewish Studies and English and director of the Jewish Studies Program at Wellesley College.