When Your Book Is Protested: Lessons in Communal Knowing

There are two aspects of protests that I hadn’t really understood until recently. The first is the degree to which protests are not about knowledge so much as they are about what sort of knowledge matters. The second is the way in which protests can reveal points of tension within a community.

The protest from which I learned all of this was a protest of a book, my book, and it unfolded—as things do these days—online: on Facebook mainly but also in the Forward and Marginalia and a few other sites.

The New Jewish Canon: Ideas & Debates, which I coedited with Yehuda Kurtzer, is an anthology of excerpts from about eighty primary nonfiction sources written between 1980 and 2015. The pieces offer an incomplete but rich snapshot of the conversations Jews had about themselves as they shaped and responded to the world in which they lived during this period: debating their values, determining their communal priorities, educating their children, and more. The primary sources are all accompanied by commentaries written by contemporary scholars—some senior Jewish Studies colleagues, but many mid-career or junior; some firmly entrenched in academia and others writing from various alt-academic vantage points.

Inclusion in the volume does not mean our approval of the individuals or their works.

Together with a brief summary, the book’s table of contents appeared on the publisher’s website in mid-April, three months ahead of its scheduled publication date. Yehuda posted a link on his Facebook page. And within just a few days, that post became the site of several dozen attacks on the book and on Yehuda and me. Our book was under protest—or, to be more specific, our book’s table of contents was under protest. At issue was our choice to include excerpts of writing by three individuals who have been accused of—and to varying degrees have admitted to—a range of sexual misconduct toward women in professional settings.

Initially we responded on Facebook by protesting the protest with more information. We chose sources out of recognition of the importance they had had at the time they were published or recognition that they reflected intellectual shifts as they were happening, even if we could only see those shifts in retrospect. Inclusion in the volume does not mean our approval of the individuals or their works. We were not seeking to rehabilitate the reputations of people known to have committed acts of sexual violence or any other bad acts; we were not seeking to rub salt in the wounds of those who had been hurt by these acts.

As the Facebook protests continued, it became clear that no one was reading what we had written, and Yehuda and I decided to stop responding. Behind the scenes, we made a few changes to the book, in particular by rewriting a section of the introduction to more explicitly address #metoo. We wrote an op-ed that was published in Marginalia in June, addressing both the book’s aims and the experience of having been, as we put it there, “on the wrong side of call-out culture.” Both that op-ed and our introduction, once the book finally appeared, were well received, which was gratifying. One speaker mentioned the The New Jewish Canon once in a roundtable on #metoo at the AJS Annual Meeting in December 2020, but no one else picked up on it.

From an intellectual perspective, I believe that the protest of our book led us to make it better. Insofar as the protest demanded a response, I clarified for myself what I think should be the longer-term ramifications when it becomes known that a colleague has engaged in a pattern of sexual misconduct toward colleagues. Insofar as people now care what I think about this topic, I have unwittingly become something of an expert on the legacy of #metoo, and for as long as people find my take helpful, I am happy to share my views.

But here’s the thing. There may be times when public shaming is called for. Certainly, when leaders and public figures act in ways that harm society or otherwise call their qualifications to serve as leaders into question, public shaming can be the most effective way for the everyday person to express their displeasure and create change. But publicly questioning a book’s table of contents and the integrity of its editors (and by extension those who wrote commentaries for the book) without first asking about the book’s aims? Are we not, as scholars, committed to research as a means of understanding? This is the part of the protest that I simply do not understand.

Yehuda and I never expected that the editorial choices we made would go unquestioned. Interestingly, though, no one has yet questioned, let alone protested, the material we ourselves find most troubling. In particular, the primary sources in the book include several that are widely viewed as politically extreme; we chose to include them to make the specific point that calling someone’s views extreme makes it all the more important to understand those views and even to recognize how close they may come to the so-called mainstream. I hesitated most around including material from Torat Ha-melekh, a 2009 text justifying the killing of non-Jews in halakhic terms. This is a text that is not widely known even as its authors and the institutions they run have inspired some Jews in acts of terror against Arabs in Israel and the Occupied Territories. There is no question that publishing it in our book gives it a wider audience, as you will struggle to find any part of it in English anywhere else. Despite my unease, I am glad we included it for the exact reason that I prioritize knowledge and understanding and the recognition that these views too are part of the contemporary landscape of Jewish ideas.

But where are the protests around this source? Though it surprised me at first, I assume this reflects a general understanding that our inclusion of these pieces does not signal an endorsement of the views it expresses or the violent acts associated with it and its authors. I suspect that these views are so beyond the pale for most, if not all, of our readers that they cannot imagine that we ourselves might hold them.

Why did the same general understanding not extend to our inclusion of writings by authors known to engage in sexual misconduct? My best guess at this point comes down to a concern or even a fear on the part of the protesters that the issue of sexual misconduct has not yet been resolved. That the mainstream view of these men and their acts is not yet condemnatory enough such that it actually could be the case that Yehuda and I included them in the hopes of helping to rehabilitate their reputations, because somehow we think that their sexual misconduct is unproblematic.

Sexual misconduct cannot and should not be tolerated. But how can we make that our norm if we can’t talk openly about the longer-term implications of learning that the very same colleagues who produced field-shaping work were taking advantage of their professional stature to mistreat us? Some of the protesters questioned whether Yehuda and I cared how much the victims of sexual misconduct were hurt by seeing the names of perpetrators in print. We do care, very much. But as scholars, we took upon ourselves the responsibility of representing the ideas and debates of the decades between 1980 and 2015 as we understand them to have unfolded and not as we wish them to have been. Furthermore, I would suggest it is only with better understanding of what happened that we have the right to hope for a better future. 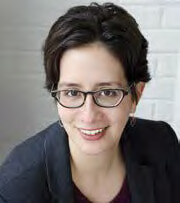 CLAIRE SUFRIN is associate professor of Instruction in Jewish Studies and assistant director of the Crown Family Center for Jewish and Israel Studies at Northwestern University. She is coeditor of The New Jewish Canon (Academic Studies Press, 2020), which was a finalist for a 2020 National Jewish Book Award in Modern Jewish Thought and Experience.