Not too long ago, I received a call from a long-time member. She had been on our website and noticed a slight change to the AJS's mission statement. The change, she observed, was not radical, but significant nonetheless. Whereas our former mission statement read

AJS's primary mission is to promote, facilitate, and improve teaching and research in Jewish Studies at colleges, universities, and other institutions of higher learning,

the revised mission statement, approved by the AJS's Board of Directors at its meeting this past December, added a new dimension:

AJS's mission is to advance research and teaching in Jewish Studies at colleges, universities, and other institutions of higher learning, and to foster greater understanding of Jewish Studies scholarship among the wider public.

The AJS, officially, now concerned itself with "the wider public," and this member was concerned that "public" was code for the Jewish community, a not too uncommon assumption whenever AJS uses the language of "wider audience" or "community." Did this change to the mission statement represent AJS turning inward, rather than broadening its scope?

I was very glad this member called. It reminded me that the optics of an organization's actions or language can be seen very differently by those not involved in the lengthy discussions around them, unless such actions and language are explained clearly and immediately. And so, for this member and the rest of the AJS membership, some background regarding the subtle but no less significant change to our mission statement.

As I've written about in an earlier column, the AJS completed a strategic planning process in June of 2013. Among its many parts, this project involved analysis of the AJS's mission statement to make sure it still reflected current needs in the world of higher education and in the professional lives of our members. Indeed, there are some organizations that simply outgrow their mission – think of the March of Dimes, which was set up to cure polio! After conducting numerous interviews and focus groups, our planning consultant and committee concurred: the need still existed for AJS to serve the field of Jewish Studies and "serious scholars" working inside and outside of academia, in North America and abroad. We did not have to radically re-define who we are and what we do, although given dramatic changes in the world of higher education and the academic job market, we did need to re-think how we serve our members and the field.

The question of AJS's relationship to the general public has been less fraught, although not simple. Would trying to bring Jewish Studies to wider audiences somehow dilute the seriousness of AJS's work, and thereby its value to the community of scholars? And yet, AJS's ventures into the public arena over the past few years had been widely praised, both by the communities they reached and the scholars involved. AJS's Legacy Heritage Jewish Studies Project, supported by the Legacy Heritage Foundation and now in its last year, has connected the work of Jewish Studies professors to non-academic audiences in small-to-mid-sized cities, places that lacked the major Jewish cultural institutions of a New York, Los Angeles, or Boston. This program has been wildly successful by all accounts, giving interested and engaged audiences the chance to learn about Jewish Studies scholarship, and scholars the chance to broaden the reach of their work and programs. AJS's Distinguished Lectureship Program, now in its second year, has also helped to make the work of our members more accessible, sending accomplished scholars to assorted venues to share their research. Scholars, in general, want people to hear about their work and find it meaningful and enriching. Was this something, then, that AJS should more strategically and explicitly support?

To help answer this question, we turned to the mission statements of other learned societies. Among those we sampled – major societies representing the fields of literature, history, religion, biblical studies, and anthropology – virtually all had a public dimension. Somehow, each was trying to connect the work of its members to broader audiences, and encourage the general public – of all backgrounds – to understand the value of its field.

It was from this research, and hours and hours of discussion, that the Strategic Planning Committee put forth a revised mission statement, including a public dimension. The committee concluded that adding the public in no way diluted AJS's focus on serious scholarship, but rather would promote the wider appreciation and relevance of such scholarship at a time when the humanities, social sciences, arts and everything except science, technology, engineering and math (STEM), seem to be under attack. The committee then shared its recommendation with the AJS Board, which debated and tweaked the statement over two meetings in 2013. The Board approved the new language on December 17, 2013.

What do you think about our new mission statement? How do you engage audiences outside the university's walls? And how can AJS continue to support your work? Please let us know. 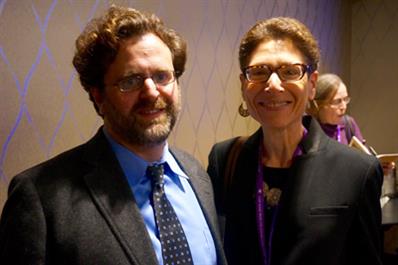