Memories/Motifs is an online exhibit that examines the use of multiple media forms to construct stories about Holocaust survivors in the immediate postwar period and considers how American Jews first learned about the Holocaust after the war. The exhibit traces the stories of three survivors — Kurt Maier, Irene Guttman, and “Hannah” — as they were transformed for American audiences and marks the changes in narratives across time. Using hyperlinks, tagging, and visualizations, the exhibit also highlights themes unique to early Holocaust survivor representations, such as immigration and America as a site of haven.

A key motivator of this project was to create a public forum for rethinking acquired knowledge about the "Myth of Silence" and early postwar Holocaust memory. To do so, I used Scalar (a digital book building platform) to transform my dissertation research into a work of public history, inviting audiences, scholarly and general, to interact directly with the radio broadcasts, short films, and other multi-media materials that had so long been buried in the archive. In many ways, the project has already been successful in this regard: Memories/Motifs has been used in college classes as a resource for thinking about the American Jewish response to the Holocaust and can be used to reinsert the postwar back into the story of Holocaust memory and the development of Holocaust culture in America.

But, the process of building Memories/Motifs proved that using digital tools is more than a practice in public scholarship. What would it take to provide not just access, but meaningful access, to this limited set of survivor narratives? How could I use hyperlinks, embedded media, tagging, and data visualization to express a rich historical narrative of Holocaust memory?[1] To enable this kind of linked intertextuality, I built both linear and non-linear paths and employed Scalar's built-in visualizations to create a network of meaning around postwar Holocaust memory that roots each narrative in its time and also connects it to contemporary Holocaust memory culture. You can track a chronological story by following one survivor's path or jump around through thematic and media-centric tagging, contextual hyperlinking, and embedded materials.

Two examples can help make this point clear: first, if you follow Kurt’s path, you can learn about Kurt’s experience under Nazism, listen to his performance on a 1947 radio broadcast, Out of the Wilderness, read his story from the 1947 New Yorker article, “Displaced,” and listen to the dramatization of Displaced for radio by Paul Muni. Throughout, you can follow a number of hyperlinks that provide historical background about Theresienstadt, Auschwitz, Buchenwald, or Death Marches. Alternatively, you can hear recordings of his music from after the war. So the user chooses how to contextualize Maier and his experience. A particularly interesting link follows Maier’s performance of My Yiddishe Mama from postwar American radio to 1970s Algeria — Salim Halali performed the Yiddish song on Algerian TV in 1971, a performance now on YouTube that, when juxtaposed with Maier’s own performance, raises questions about how the song was heard and understood by such different audiences and what kinds of longing the song evoked in each context.

Second, if you follow Irene’s path, you can trace the evolution of her story over six decades of Holocaust memory culture: from 1947 (when Irene is featured in the Life magazine article “Orphans Clothed”) until 2005 (when she was the subject of a documentary film, Rene and I). Memories/Motifs maps the changing contexts of Irene’s story: the technology of collection and dissemination, the organizations that sponsor her story, and the agency with which Irene asserts her experiences. Connecting Irene’s story across time, place, and media allows me to engage with the ways Holocaust memory has been and continues to be edited, shaped, and packaged and invites users to consider their own interpretation of these changing dynamics.

Additionally, I have recently expanded the online world of Memories/Motifs by launching a Tumblr blog and Twitter feed. These online platforms allow me to further the conversation about postwar memory in America, the construction of Holocaust narratives, and the employment of Holocaust memory for a range of contemporary issues. Thus far, I have written about a Holocaust survivor’s Reddit AMA (Ask me Anything), Rosh Hashanah in DP camps, and what makes Holocaust memory “appropriate.”

As such, online spaces offer the potential for multiplicity in ways that inspire new modes of meaning making, argument construction, and the very act of storytelling. More than a public forum, Memories/Motifs has become a project of imagining and reimagining the construction of postwar Holocaust narratives that continues to provoke new kinds of questions about the ways we create memory. 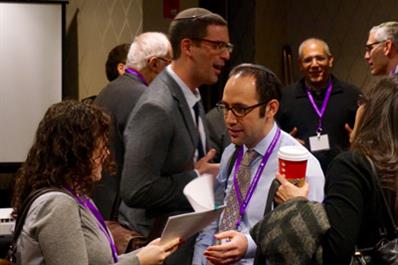