As we learn verbal forms and we reach the imperative in my beginner’s Yiddish class, that week’s song is “Un du akerst un du zeyst,” (‘And You Plough and You Sow’), written by writer and philosopher, Chaim Zhitlovsky, as an adaptation of a German poem by George Herwegh. We have already covered the present tense, and this song (I always hand out the musical notation) has many second person singulars ending in -st for review, with its refrain concluding with the imperative to the workers, “Tserayst di keytn fun shklafntsvang (‘Break the chains of slavery’). This opens up a chance to discuss the involvement of east European and American Jews in socialism in the late 19th and early 20th centuries. Verbal forms, rhyme, and cultural and political trends are all intertwined.

We sing and the beat goes on. The present tense was introduced in class along with the simple folksong, “Az der rebe tantst” (‘When the Rebbe Dances’), presenting several verbs by which to learn the conjugation and at the same time poke fun at Hasidim for mimicking their rebbe. But even in the first week of class, before the students tackle any grammar, they can learn to sing the song “Bulbes” (‘Potatoes’) and thus memorize the days of the week in Yiddish, while they get a lesson on the poverty of Jewish eastern Europe. The first day of class, often near Rosh Hashone, we learn to sing the simple phrases of ”Gut yontif aykh” (‘Happy Holiday to You’) to its alternating melodies. Students in the advanced class purchase Pearls of Yiddish Song by Eleanor and Joseph Mlotek (Workmen’s Circle) and during their year are treated to the development of a repertoire of spirited theater songs. There is no better window onto the vibrancy of Yiddish culture, especially while you are singing and dancing.

But even the beginner can get into this world when we sing along in class to the subtitled video, Lomir ale zingen (‘Let’s All Sing’), in which a group of then-young singers and dancers led by Mike Burstein and directed by Zalmen Mlotek, present a musical theater review. One of the songs performed in the video is “Afn veg shteyt a boym” (‘A Tree Stands on the Road’), by Itsik Manger, who starts his song with the first two phrases from a folksong about a Jew travelling to erets yisroel, but develops it into the touching theme of a mother who overburdens her child with too much love. The Yiddish words are too much for the beginning student, but a lot can be gleaned from the 4-minute animation video production of the song, The Bent Tree, created by Sally Heckel, which includes sung Yiddish words and spoken English translation. Song is a vehicle for teaching language and culture in the classroom.

The inspiration for my including songs regularly in Yiddish language courses was a Barnard senior in my Advanced (3rd-year) Yiddish class during my first year of teaching at Columbia. She reported that she would sing the song of the week again and again in the shower, when she went home for shabes or yontif she would teach the repertoire to her mother, and before you know it the whole family was singing. I realized that this was a good way to teach grammatical constructions and phraseology that would be absorbed by dint of repetition. I had tried to invoke repetition a few years earlier by requiring memorization and recitation of poetry in my intermediate and advanced classes at UMass Amherst, but the undergrads and graduate students in those classes went on strike and refused to learn that way. Deklamirn ‘declamation’ had after all been the sina qua non of my Yiddish literary studies in the New York City secular Yiddish elementary and high schools, but it was not working for this new generation. However, I’ve never gotten pushback from students when we learn songs. Music helps the learning of sound patterns, and the emotion and cultural subjects continue to engage my Yiddish students.

Most of our time is spent of course in learning syntax and graded vocabulary and doing and marking scores of written exercises. I use the first college text, College Yiddish, by Uriel Weinreich, who established the first graduate program in Yiddish Studies. Although there are other textbooks by now, I want the students to be introduced to Weinreich’s profound understanding of the culture of east European Jews and of how to teach this culture after the destruction of its heartland. My first-year students retrieve the everyday conversations on-line of Shalom yidish, designed by D. Kosman and I. Niborski, built on graded vocabulary and grammar, and accompanied by a book.

And whenever possible, I invite into the classroom community guests who share the experience and meaning of Yiddish in their lives. The guests used to include Holocaust survivors and American-born children of immigrants. But nowadays I turn to younger members of the community, often university students and musicians. This past November, Andy Cassel, a long-time accomplished journalist, an economics and business columnist who has written features on Yiddish subjects, came to our class. He described how his initiation to Yiddish was driven by his need to understand what his grandfather had written about his European hometown in Yiddish. After having studied locally for many years, in the summer of 2014, he participated in the intensive language program in Vilnius. Andy is now planning a program at Haverford College in April in Yiddish to mark the centenary of Sholem Aleichem’s death. Along with Andy, Alex Sender Botwinik, shared his life immersed in Yiddish and especially in Yiddish music with my students. Sender talked about growing up in Montreal, the son of two survivors, his father from Vilna who spoke Yiddish to the children and his mother from Italy who spoke Italian. His father taught music in the local Jewish day schools, and Sender pursued musical training. He also teaches Jewish music to children, teaches Yiddish at Penn, and directs choirs and accompanies singers. Recently he edited a volume of his father’s Yiddish musical compositions. My students were enthralled to see that there are new generations who appreciate Yiddish culture and identify intimately with it.

The bulk of my time over the decades has been spent in researching cellular and molecular systems, using my Ph.D. in biological sciences, and linguistic, cultural, and social systems, using my Ph.D. in linguistics and Yiddish Studies. Nowadays I usually teach courses on Jewish history, ethnography, and literature; sometimes I also teach undergrads and graduate students the ethnography of communication and issues of language and society. However, whenever there are enough students, I teach Yiddish. I have taught so many different kinds of courses in the natural sciences, social sciences and the humanities over the years, but I have never found students more enthusiastic than Yiddish students. Yiddish culture when presented in a classroom has a unique attracting power.

Over the past thirty years, although not my major occupation, I have had opportunities to teach all levels of undergraduates, and also advanced Yiddish and various topics in Yiddish Studies for graduate students. I was able to mine my inheritance and education for cultural sources for my students. I had grown up with Yiddish-speaking grandparents, studied Yiddish from age 7, including at New York’s Jewish Teachers Seminary (which closed its doors in 1977). In addition, as a graduate student at Columbia, I was presented with a full program of Yiddish Studies courses at the Masters level, a program initiated by Uriel Weinreich and continued by his student Mikhl Herzog, in addition to courses at YIVO’s Max Weinreich Center. I was privileged as a faculty member at Columbia in the 1990s to update that curriculum to include courses on a full array of cultural sources, bibliographic, archival, ethnographic, as well as exposure to various research methods that are relevant to Yiddish Studies.

Today, the teachers and researchers of tomorrow no longer have such a graduate curriculum available to them at any university. In Manger’s song, we sing, “Un dem boym gelozt aleyn hefker far dem shturem,” (All the birds have deserted ‘and left the tree alone, unprotected in face of the storm’). Jews, as all groups after genocide, have not been able to effectively teach about the world that was lost. Are we leaving Yiddish hefker ‘abandoned, ownerless, lawless, unprotected’? If the field of Jewish Studies is to meet the needs of the academy and the cultural needs of future Jewish generations, we must train our advanced graduate students how to listen deeply to the sounds of Yiddish, including to the songs sung in Yiddish for centuries.

Rakhmiel Peltz is professor of Sociolinguistics and director of Judaic Studies at Drexel University, Philadelphia, PA. 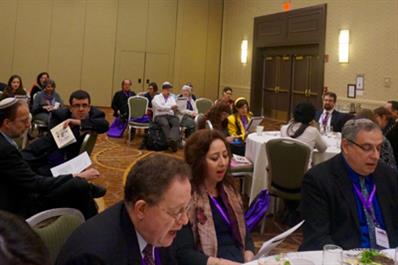