Survival Strategies: What the Field of Jewish Studies Can Teach the Humanities

The humanities are in crisis. Much ink has already been spilled over the mounting evidence confirming the crisis, postulating reasons for it, and longing for the era before higher education was made to answer to a market economy. Yet, despite all this, relatively little has been offered up regarding the structural conditions that render some humanities programmes at risk, and others buoyant.

The field of Jewish Studies, divided as it is between distinctive geographic regions, offers the opportunity to consider the factors that weaken or strengthen the humanities as they pass through the current moment of uncertainty. As I’ll describe below, Jewish Studies in America has the immense advantage of years of funding and the infrastructure, research and scholars that this funding has produced. On the other hand, European Jewish Studies has excelled in creating competition-ready scholars, capable of winning funding at every level. Although the United States is likely to remain the Goliath of the field for decades to come, there is something nimble and David-like in the functioning of Jewish Studies within Europe. While it is by no means a competition and the survival of both is better for all, the question of which model is better suited to the new realities of higher education is an interesting and, perhaps, instructive one.

The ties binding together the community of American scholars of Jewish Studies are woven more tightly and go back further than those connecting their European counterparts. That this should be the case is no surprise. In fact, judging by the societies’ histories, this seems inevitable.

The Association of Jewish Studies (AJS), an American-based learned society, was founded in 1969, after a period of rapid growth in academic Jewish Studies and in university area studies more generally (including the rise of African Studies, Latin American Studies and Asian Studies). As Kristen Loveland points out in her history of the AJS, in these early years, 80% of practitioners in the field were educated by just two professors -- Columbia’s Salo Baron and Harvard’s Henry Wolfson (Loveland, 2008: 3). Diversity was not a strong suit. Further, Loveland notes, initially only Jewish practitioners of Jewish Studies were invited to the AJS’s annual conferences. A decision that one participant, Irving Greenberg, claimed was “recognition that more is at stake in Jewish Studies than increasing research and teaching efforts in the field” (Loveland, 3).

Even today, a 2014 survey of AJS members revealed that a mere 17% of the members identified themselves as “not Jewish.” Although AJS past president, Jonathan Sarna, trumpeted the number as an indication of the health of the field during his Formal Address at the 2014 AJS Conference Dinner, this figure includes the significant number of ethnically Jewish respondents who, for ideological reasons, might refuse to identify themselves as such.

The origin of the European Association of Jewish Studies (EAJS) could not be more different. As opposed to the grassroots development of the AJS, the EAJS was the brainchild of a visiting American scholar of Jewish Studies who took the initiative to coordinate, organise and motivate his European colleagues. Professor Jacob Neusner of Brown University concluded at the end of his 1980 European lecture tour that the time had come for European practitioners of academic Jewish Studies to organise themselves. In his own words.

My recent trip to lecture at a number of universities in Germany, France, The Netherlands, and Britain, left the impression that Judaic studies in Europe are now poised for an important step of stabilisation and consolidation. The purpose of this letter is briefly […] to propose a modest but concrete act to improve that situation. (http://eurojewishstudies.org/about-us/history-and-aims/)

An initial meeting of 25 academics active in the field of European Jewish Studies was held in the Spring of 1981, and was followed by the EAJS’s inaugural congress in 1982 at Hertford College, Oxford which drew 100 participants from across the continent.

The effect of these contrasting beginnings can still be felt in the respective societies today. Regarding the AJS, Past President Sara Horowitz wrote in her 2008 presidential note:

Remarkably for its size and scope, AJS at forty maintains a strong sense of community. Although membership has grown from a few hundred to more than seventeen hundred, we have managed to retain the feel of a small organization—familiarity, hominess, friendliness, ease of meeting (Loveland, 16).

For a professional body, this degree of cosiness seems extreme. One intuits that heymish, the Yiddish word for home used to evoke a particular warmth and comfort, was on the tip of Professor Horowitz’s tongue even as she opted for the English word instead. And, this sentiment owes much to the shared communal background of the vast majority of AJS members.

By contrast, the European model assumes no a priori cultural memberships. It features instead convergence based solely on academic subject matter. These are reflected in the outlook of EAJS Past President, Professor Judith Schlanger. In her view, the very strength of European Jewish Studies rests with its majority non-Jewish academics active in the field. In her view, only they can be truly objective and thus legitimise the field as an academic pursuit and not mere identity politics.

Where the Money Is…

In their absence, European scholars in the field of Jewish Studies punch well above their weight in the competition for national and international research grants. Taking the United Kingdom as an example, we might look to the incredible success of University College London’s Sacha Stern in winning an European Research Council (ERC) funding package worth £2.5million for his calendars in the late Antiquity project or Nicholas de Lange’s ERC win of nearly £1 million to map the Jewish community of the Byzantine Empire, based at the University of Cambridge. In terms of National research councils, there exist few more telling examples than the case of independent scholar Sharman Kadish’s 2006 architectural survey of Jewish heritage in Britain and Ireland. The survey, run out of the Centre for Jewish Studies at the University of Manchester, won the support of English Heritage, the Heritage Lottery Fund, the Arts and Humanities Research Council, and the British Academy, not to mention a flush of other private Jewish and arts and humanities foundations. In Europe, the quest for survival is a quest for research funding. Academics working in the European context understand this reality and position themselves accordingly.

In America, the quest for survival is a quest for donors. As evidence, one might point to the proliferation of named professorships, departments, centres and institutes devoted to the field of Jewish Studies dotted across the North American continent. In his recent survey, Dean Phillip Bell counted more than 250 endowed professorships at 85 colleges (Bell, 2013: 10). Such a flowering would be fine so long as there continues to be a wealthy North American Jewish community to fund the ongoing growth of the field and an interested student body to take up Jewish Studies provisions that justify the provisions. In recent years, though, both these former certainties have become increasingly less so. The global economic crisis shook both the abilities of donors to carry on developing professorships and the willingness of students to undertake non-STEM, non-career-driven courses of study. For instance, 30% of respondents to the AJS survey noted some decline in enrolment where only 21% noted an increase (Cohen, 2015: 25). Skewered by empty coffers in the community and empty seats in the classroom, Jewish Studies in the United States was particularly badly hit by the humanities crisis and the final toll is likely yet to be seen.

Even now, though, the declining number of new hires in the field of academic Jewish Studies in America serves as a canary in the coalmine, quantifying in numerical terms what can be felt in so many other ways on campuses and at conferences. Steven M. Cohen commented on the matter in his 2014 highlights from the AJS member’s survey. He writes: “Most startling is the very large number of recent Ph.D.s’s (2010 or later) who are looking to change their employment situation --- 55%!” (Cohen, 37). Echoing this, research on the AJS jobs board shows that the total number of non-tenure-track teaching positions lasting more than one academic year declined dramatically in 2012-2013 compared to previous years (http://www.ajsnet.org/jobsdata.htm.) As fewer students enroll in programmes of Jewish Studies, fewer instructors are required to teach them. Yet, because of the marvelous American centres of Jewish Studies already in existence, there continues to be a glut of truly top-rate early career scholars introduced onto the academic market each year. A log jam is as inevitable as it is painful for all those involved.

On the other side of the Atlantic, the field of European Jewish Studies was never able to establish a comparable range of stand-alone Jewish Studies departments or endowed professorships. With research money instead as the main means of gaining security and employment for the next generation of scholars, European-based scholars rely not on the dwindling number of students or the (also dwindling) number of private donors willing to prop up the endeavour. Of course, this model also carries tremendous risks. As Martin Goodman notes,

The dispersal of Jewish Studies posts into departments and faculties which house their main disciplines (such as history or modern languages) – which may give disciplinary credibility but may also leave the subject vulnerable when the current postholder retires (Goodman, 2002: 8).

Undeniably, the winds of change are fast ripping through the humanities. In this new environment, few certainties remain and it very well may be that ours was the last generation for whom Jewish Studies, and the humanities more broadly, were the right of the many rather than the privileged few. Here I have tried to suggest some ways in which the formation and contexts of Jewish Studies in North America and the Europe might point to varying degrees of structural fortitude. In the United States, decades of support from local Jewish communities has helped to create standard-setting Jewish Studies provision and research in some of the world’s foremost universities. However, in Europe the need to compete as fiercely as possible for grant-funding has resulted in a field that is streamlined, and competition-ready. Consequently, European Jewish Studies is more fully integrated into the general academic infrastructure and discourse; it is more poised and used to turning its hand to the wider societal needs and questions that research competitions often highlight. While American Jewish Studies will certainly survive this era, this survival will be the result of its past fundraising successes and the infrastructural stability these have afforded. The survival of Jewish Studies in Europe, however, will be a testament to the true storm-readiness of this small and agile field within a competitive academic landscape.

Unexpectedly, the events of this year, extraordinary as they have been on both sides of the Atlantic, have highlighted the increasing – not decreasing – relevance of Jewish Studies and particularly Jewish history for society. Inevitably, research councils and private donors alike will seek answers to the complex questions thrown up by the present historical moment. It is conceivable that they could turn to scholars of Jewish Studies for this. Whether they will or not depends on the entrepreneurial spirit of our researchers. In short, now is the time for Jewish Studies academics to sharpen their pencils and their wit toward making their case. 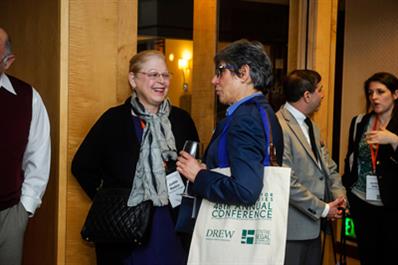