Above: Detail from Matt Gillard. Ezekiel Blames the Victim, 2019. Water mixable oil on canvas. 44 in. x 71 in. Courtesy of the artist.

Whipping the Words of Ezekiel into His Own Back: A Conversation on Portraying Biblical Violence

Every other year, I teach a course called “Angry God: The Bible and War,” in which students engage with the ugliest texts from ancient Israel and surrounding regions. The class focuses on questions of human nature, social inequality, and conceptions of personhood, the body, and gender. Students are asked to produce a creative project in the medium of their choice, examining how ancient and contemporary phenomena of violence intersect with each other.

While the creative projects I receive are often very interesting, this year an MDiv student named Matthew Gillard, who received a BFA before starting his training for the Anglican priesthood, submitted a project that really impressed me. Matthew’s creative project consisted of two paintings representing the traumatized violence of the book of Ezekiel. The first painting depicts the whorish wife Jerusalem from Ezekiel 16 and 23. In the painting, Jerusalem is a woman surrounded by animal-human hybrids representing different empires. Her legs are open wide and her vagina is an open and bloodied city gate. Scrawled across the canvas are verses from the book. In the second painting, Ezekiel is portrayed naked, his hair partly torn out. He is whipping the rage-filled words of the book into his own back—an evocative portrait of how Ezekiel’s condemnation of Jerusalem is actually a traumatized condemnation of himself. In the background, the people of Jerusalem are marched into exile, suffering all manner of violence and abuse as they go. King Nebuchadnezzar looks on, his face ghastly.

Jerusalem the whore surrounded by her lovers. Matt Gillard. Jerusalem’s Unfaithfulness, 2019. Water mixable oil on board. 48 in. x 22 in. Courtesy of the artist. 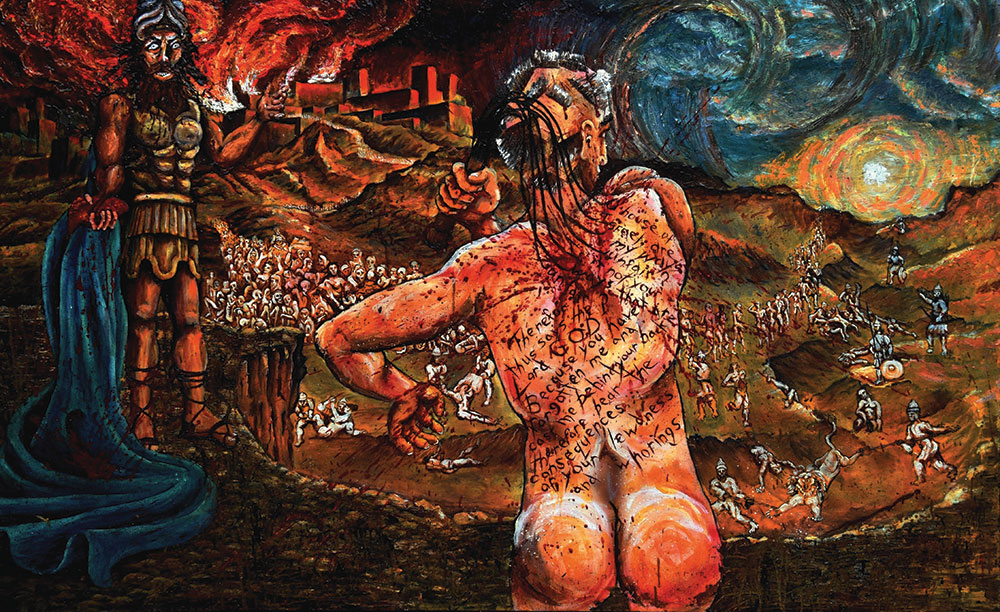 Ezekiel the prophet-priest whips his words into his own back. Matt Gillard. Ezekiel Blames the Victim, 2019. Water mixable oil on canvas. 44 in. x 71 in. Courtesy of the artist.

I spoke with Matthew Gillard about his paintings. Here are excerpts from our conversation.

Lemos: I’d like to talk to you about the process of doing a creative project and how it worked for this material on violence in particular, as well as some more personal aspects of the creative project for you.

Gillard: When I started to plan for the project, I thought of artists who had worked on violence and looked at the material that they had come up with to see if it inspired ideas, while I was reading the material you had assigned our class to read. So, I looked at Ralph Steadman, a contemporary British cartoonist who did a lot of antiwar art during the Vietnam War, whose work both analyzed and critiqued aspects of society he found troubling, but did it in a very humorous way. I also thought about Leon Golub, another antiwar artist during the Vietnam War, and Francisco Goya, who did the Disasters of War series. A lot of his work for that series deals with transgressions against the body. Another artist I thought of was J. M. W. Turner, the British romanticist of the early 1800s; his work deals with the power that exists in nature.

Lemos: Of all of the different topics that we dealt with in the class, why did you choose the book of Ezekiel?

Gillard: One of the ideas that you discussed in class was the concept of victim-blaming; when there is some sort of trauma that is suffered in a group, the victim will be blamed or they will blame themselves. There will be a certain amount of shame applied to that and the shame jumped out as I read Ezekiel. There was also some very negative imagery of women and I wanted to explore why that was and critique it, and hopefully make fun of that in a way that does critique it and acknowledges that this is something troubling that we have to deal with. I think we can use victim-blaming to show where this very misogynistic imagery is coming from.

Lemos: Part of what was so effective for me about the paintings was how they brought together multiple themes from the class. You have the dehumanization theme, the torture and body manipulation theme, gender, masculinity, status, trauma, and responses to trauma. There is also the textual engagement. That is what made this project very effective and gratifying for me as a professor.

Gillard: I thought the course was a very positive experience.

Lemos: Another thing I wanted to discuss with you was disability issues and how you think they relate to the course and Ezekiel. Personally, I feel a connection with the book of Ezekiel. It’s a very physical book, a very carnal book in different ways. I think that having a neurological disorder has brought home for me the frailties of the body, the vulnerabilities of the body 2019through my grappling with this disorder. You also have a neurological disability. Do you feel that you have thought through or addressed your disability as you have done this assignment or otherwise in your MDiv education?

Gillard: My disability has kept me aware of human frailty. There are ideas that I want to communicate but I will be limited by my own abilities as to how effectively that can happen. And I think it is good to be aware of those limitations and the fact that all humans have limitations.

Lemos: The book of Ezekiel certainly offers striking images of human weakness and how this prophet attempted to transcend his own weaknesses and the limits of his own life. 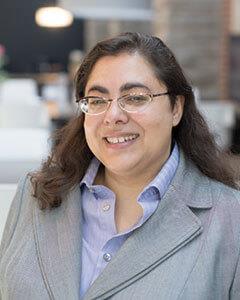 T. M. LEMOS is associate professor of Hebrew Bible at Huron University College and a member of the graduate school faculty and an affiliate faculty member of Women's Studies at the University of Western Ontario. Her most recent book is Violence and Personhood in Ancient Israel in Comparative Contexts (Oxford University Press, 2017), and she is a coeditor of the Cambridge World History of Genocide (forthcoming in 2020).