Since 2006, I’ve been writing in fits and starts a history of the Algemeyne entsiklopedye (General encyclopedia, Berlin, Paris, New York: 1932–1966), which is the first, and so far only sustained attempt to create a universal encyclopedia in the Yiddish language. When it launched in 1931 to celebrate the seventieth birthday of the Russian Jewish historian Simon Dubnow, it was planned as a five-year project that would result in ten volumes of general knowledge plus a supplemental eleventh volume on Yidn (Jews). Having begun in Berlin, Germany, in 1932, the Algemeyne entsiklopedye faced interruptions far beyond what its initiators could have ever imagined. The encyclopedia was interrupted by the rise of Nazism in Germany in 1933, the Spanish Civil War, the invasion of France in 1940, the Holocaust, and then by the reorganization of Jewish life after the war. The publishing venture involved hundreds of intellectuals, Yiddish cultural activists, and political figures from Europe, the United States, Palestine/Israel, South America, South Africa, and Australia. It brought together Yiddishists and Hebraists, Zionists and Diasporists, the religiously orthodox and secularists, and Jews of nearly every political stripe.

My effort to write a monograph on the encyclopedia has itself been defined by interruptions, although by ones far less earth-shattering. Some have been caused by global events (such as the 2008 recession and now the Covid-19 pandemic) while others have been much more personal in nature (ranging from the life-threatening to the nearly miraculous).

I began to write on the Algemeyne entsiklopedye when asked to contribute to a special 2006 volume of the Journal of Modern Jewish Studies dedicated to Jewish encyclopedias.i I was just finishing my first monograph and this seemed like a viable second project.ii The subject was instantly compelling. In the last days of the Weimar Republic, a group of eastern European intellectuals and political leaders who had taken refuge in Berlin decided to launch a Yiddish-language encyclopedia for the roughly nine-to-ten-million Yiddish readers in the world. Their goal was to provide an encyclopedia that could serve as a tool for the modernization of Yiddish-speaking Jewry and as an assertion of their right to join the community of nations. Simon Dubnow himself referred to it as a “Bible for a New Age.”

Soon after a specimen volume was published, the Nazis took power in Germany. As Jews, foreigners, and members of the Left, the encyclopedists were at triple risk of arrest and soon fled. Reestablishing themselves in Paris, they slowly began to rebuild their project, publishing on average one volume a year for the rest of the 1930s. They faced countless hurdles and obstacles, many of their own making (none of them, in fact, knew anything about publishing an encyclopedia) but even more because of world events. The Great Depression nearly bankrupted the project. Rising antisemitism caused many to relocate from country to country. The struggle against fascism, first in Germany and then in Spain, overtook their attention. Then came the war, the refugee crisis, the flight to America, and the Holocaust, which they observed from abroad.

By the end of the war, the original vision of imparting general knowledge to a mass reading public gave way to the realization that Yiddish readers no longer required a universal encyclopedia in their own language. In the end, only five of the volumes follow the original plan; they halt partway through the letter beys. However, another seven additional Yiddish-language volumes were ultimately dedicated to the subject of Yidn. Taken together, the Yidn volumes chart the rise of European Jewish history and culture, its demise in the Holocaust, and its surviving remnants in the Americas. Four volumes also appeared in English translation as The Jewish People: Past and Present.

Writing this history has taken too many years, and it’s not only because the archives are scattered around the world. Soon after starting on it in earnest, the Jewish Studies department at the university where I worked collapsed. I’d been hired in 2003 as the fifth member of a robust program. The economic crisis of 2008 gave the university the excuse to accelerate its cutting of tenure-track lines. By 2010, I was the last full-time faculty member and had to oversee its transition from a department to an interdisciplinary program. Soon after, my university decided to cut several major academic programs in a purge that made international news and occupied all of our time in resistance.iii When I finally took a research leave in fall 2012, I got to work. I deleted my Facebook account, tuned out the world, and was able to write a draft of the first third of the monograph, which covered the Berlin years.

On good days, I now have a few hours to myself to start working on part 3, but most of that the time is spent on email, advising students, and trying to not to read the news every twenty minutes.

Then the interruptions really began. Within weeks of finishing that section the following spring, a bicycle collision with a distracted motorist eventually led to three surgeries (one cardiac, two spinal). The following year, I was solicited by a press to write a history of the United States and the Nazi Holocaustiv, a topic that has fascinated me since my earliest graduate school days.My partner and I adopted a child (the aforementioned miracle), a process that took us several years and was worth every minute (and nearly every dollar we had). Two years later, we packed up our home and moved to a new university seven hundred miles south.

Now three and a half years into my new position, I’ve been granted another sabbatical, and thus another chance to focus on the encyclopedia. At first I made terrific progress and wrote a draft of the Paris years. Then, within days of sending it to my editor, Covid-19 struck in force. My university’s offices were shuttered. My daughter’s kindergarten was closed. On good days, I now have a few hours to myself to start working on part 3, but most of that the time is spent on email, advising students, and trying to not to read the news every twenty minutes. The rest of the time I am trying to be a kindergarten teacher to our child, who is enrolled in a Spanish-immersion school. I’ve not studied Spanish since high school. We’ve built a garden, made a coronavirus piñata, and have scooted every street in our neighborhood. We’ve raised money for refugee families and delivered masks and gloves to food service workers.

As I write these words from my makeshift home office, I can see my spouse chasing a cat who has run outside for the umpteenth time. I’ve had to again remind our five-year-old not to barge into the guest room that doubles as my workspace. The other cat keeps climbing over my keyboard—thrilled to have me at home all day.

Soon after the Yiddish encyclopedists arrived in New York (after fleeing Paris by way of Marseilles and Lisbon) one of them quipped over the fate of their project, playing on a well-known saying: “a mentsh trakht—un Hitler lakht” (man plans—and Hitler laughs). I don’t know if I’ll ever get this book written. This time it's the coronavirus that’s laughing. 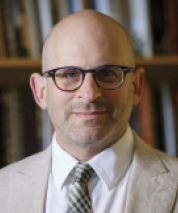