Eliaou “Elie” Pinhas Touboul recorded under various names over the course of his lifetime. For his 1928 sessions with the Columbia label, the Algerian Jew provided not one but two names to a French sound engineer: his own, Elie Touboul, and another, Pinhas El Saïdi, the latter an Arabic designation pointing to his origins in the city of Saïda. On his final recordings, made in 1945 for the Odeon label, he no longer required the geographic marker. Nor was a last name even necessary. He had become “Cheikh Pinhas”––the honorific a signifier of his mastery of Andalusian music and a testament to his own renown.

Touboul was a much-sought-after musician in his corner of western Algeria from the 1920s through the 1940s. Yet as I near completion of my monograph on the North African Jews who dominated the music scene in Morocco, Algeria, and Tunisia in the first half of the twentieth century, he is nowhere to be found. Instead, my book tells the story of the region’s biggest stars and its largest cities, thinking anew about the Jewish-Muslim relationship, and what it reveals about Jewish history more broadly. Besides, Touboul left barely a trace. Or so I thought. In summer 2019, I revisited a rare source: I listened again to a recording of his drawn from my collection of North African 78 rpm discs. That August, I posted a digital transfer of the record to Gharamophone, an online music archive I founded in 2017.i Some months later, one Paul Elie Touboul reached out to me:

It is just unbelievable for me to listen to the grandfather that I never knew [.] We only had one poor quality recording [.] All the discs have disappeared [.] I am his grandson and I bear his name. 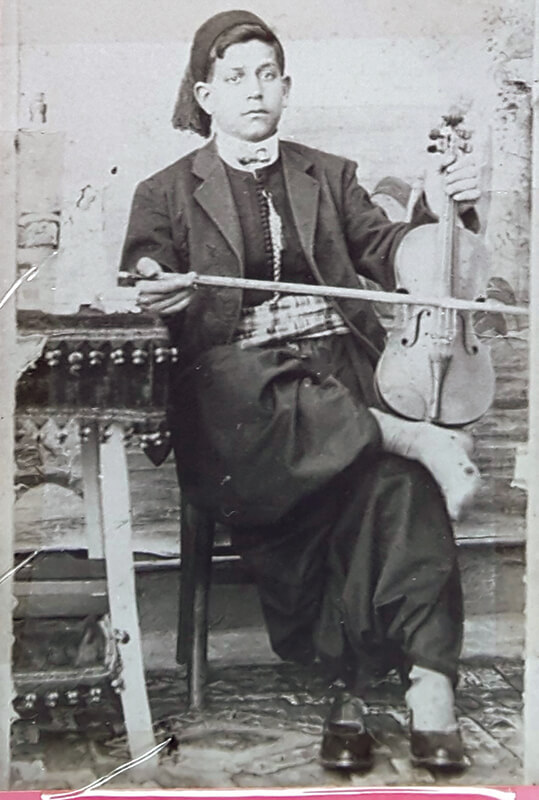 An eighteen-year-old Elie Pinhas Touboul with his violin, Saïda, Algeria (1912). Courtesy of the Touboul family

Touboul’s septuagenarian namesake generously shared with me his grandfather’s small archive. These hundred-odd texts provide for a compelling narrative. But they also present a dilemma. What do I do with a belated encounter with a new set of sources that risk secondary––and perhaps more definitive––erasure if I do not find a place for them in my book? At the very least, I start to sketch out a biography.

His parents were among the first generation of Algerian Jews to be naturalized as French citizens under the Crémieux decree of 1870.

Eliaou Pinhas Touboul was born on June 5, 1894, to Isaac Touboul and Aicha Amoyal in Saïda, Algeria. His parents were among the first generation of Algerian Jews to be naturalized as French citizens under the Crémieux decree of 1870. Historian Benjamin Stora has come to regard that novel legal status as the first of “three exiles” to befall Algerian Jewry over the course of a century (the second being the abrogation of that very citizenship under Vichy rule and the third the near total departure of Jews from Algeria in 1962). But the Toubouls, like so many others, did not experience as neat a separation from their Arabophone and Muslim milieu as has been widely accepted. Isaac, for example, was a jeweler who catered to the popular classes, Jewish and Muslim. Like a great number of Algerian Jews in his particular profession, he was also an amateur musician, committed to the multimodal suite music born of al-Andalus. His son would follow in his footsteps.

As a child, young Elie was first apprenticed to the storied Jewish-Muslim musical tradition by his father. Over time he would become inseparable from it. The earliest-known photo of Touboul, taken in 1912, captures him in traditional dress, clutching his preferred instrument: the violin, played upright on the knee. The following year, he married Aziza Teboul (no relation) of Mascara. Their first child, Viviane, was born in 1914. Her siblings Isidore and Raymonde arrived after Touboul’s return from the Gallipoli campaign, during which he was reputed to have fashioned a homemade violin out of a jerrycan. In 1919, the family settled in the coastal city of Mostaganem. Isidore later reflected that his father, a deeply religious man, found the comparatively large entrepôt too Western and French for his tastes. Still, there was more business to be had there than in Saïda.

In Mostaganem, Touboul began to make his musical mark, first at Jewish and Muslim religious celebrations, and later at more formal, if intimate, concerts. Although traditional, he eschewed neither technology nor innovation. Sometime between 1928 and 1930, Columbia Records, directed in Algeria by a certain Mr. Dukan (a fellow Algerian Jew), tapped Touboul to record for the label. “Elie Touboul-Pinhas El Saïdi” recorded approximately ten discs for the prestigious outfit. Among them was “Ya saki ou s’ki habibi” (Oh cupbearer, serve my beloved), a song-text from the core of the Andalusian repertoire.ii But in addition to accompanying himself on the violin, there was now a piano arrangement. More interesting still, he performed the piece in a mode with which it is now no longer associated. This innovative practice of employing a single sung poem across multiple melodies largely fell out of favor after World War II. In other words, Touboul’s Columbia recordings provide evidence of a tradition that contained more room for improvisation early in the twentieth century than it does today. 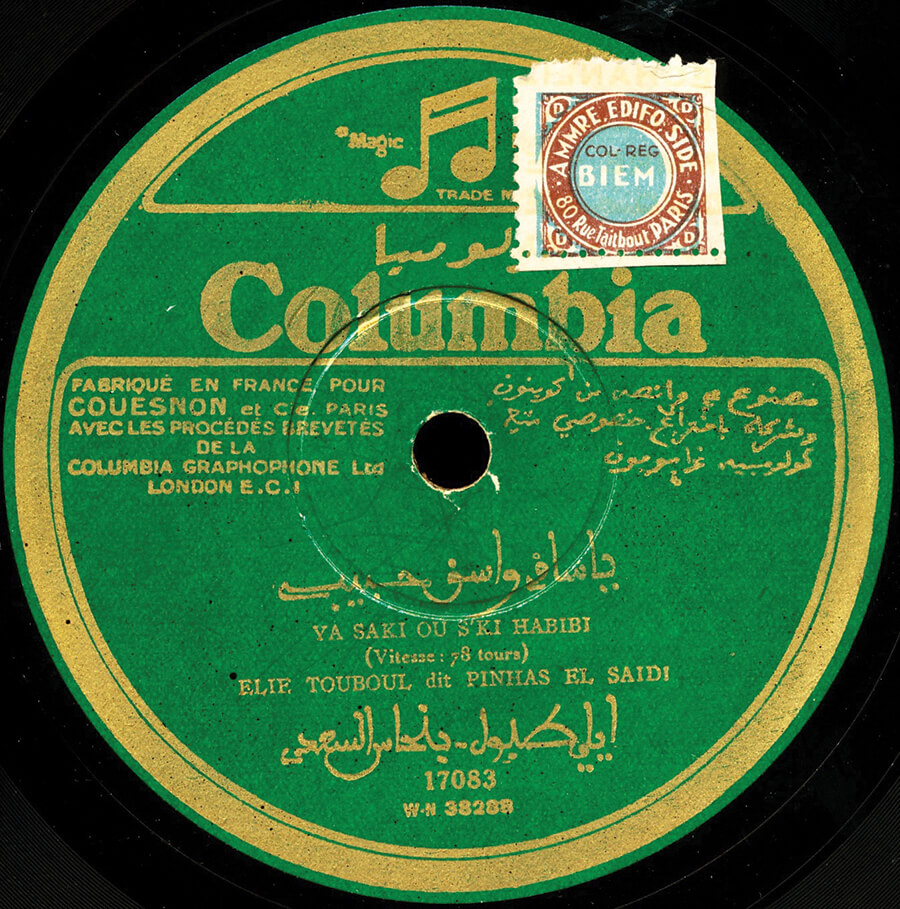 Following his Columbia sessions, Touboul’s star rose further still. As cultural anthropologists Ahmed Amine Dellaï and Hadj Miliani have shown, he and other Jewish musicians like Meyer Reboah and Isaac Benghozi were so in demand in western Algeria that the Mostaganemi poet Abdelkader Bentobdji castigated them for distracting Muslims from their religious duties and sowing fitna (discord) among them. But as devoted as the people of Mostaganem were to Touboul, he was to them. After the city suffered a devastating flood in 1927, the musician composed and recorded a song to commemorate the tragedy and honor the victims.

Like other Algerian Jewish musicians, World War II and the Vichy regime’s anti-Jewish statutes forced Touboul from the public stage. He would return to the studio once more in 1945. Performing under the name of “Cheikh Pinhas,” those handful of recordings made for Odeon would be his last. On June 1, 1947, Eliaou Pinhas Touboul died in his adopted Mostaganem.

It has once again made clear to me the power of sharing scholarship beyond peer-reviewed publications.

How do we amplify voices like those of Cheikh Pinhas? Scholars first need to learn how to listen for them—asking new kinds of questions and seeking new sources that may not be found in institutions or even on paper. We also must resist telos. This is not about mapping the inevitability of all three exiles of Algerian Jewry. Instead, this is the microhistory of a singular Algerian Jew who was nonetheless representative: one who was deeply embedded in his class and milieu, who resisted the separation that Crémieux was supposed to provide for, who remained closely linked to Muslims, and who recorded, like so many of his coreligionists, in Arabic.

Making Cheikh Pinhas audible once again has required “repatriating” his traces to those who know, care about, and feel connected to him, by using this century’s core technology and putting his music online. It has once again made clear to me the power of sharing scholarship beyond peer-reviewed publications. Finally, it lays bare the reciprocal and collaborative nature of our work. In our exchanges, Paul Elie Touboul revealed to me that “the notebooks of my grandfather’s musical compositions still remain in the cellar of the villa …in Mostaganem.” In light of the pandemic, I may not make it Algeria anytime soon. Timing once again has seemed to preclude Touboul featuring prominently in my monograph. But his story deserves to be told, as do countless others. In this way, this project, of which the book is but one component, is destined to remain forever unfinished, and I am humbled by that. 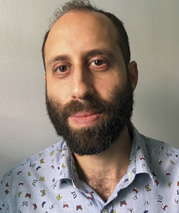 Christopher Silver serves as the Segal Family Assistant Professor in Jewish History and Culture in the Department of Jewish Studies at McGill University.