Musing over explanations for my “unfinished projects” led me to the inverse question: What accounts for unplanned success? In my anthropological and historical engagement with Jews from Libya, these opposite outcomes appear intertwined. The story begins over sixty years ago with my first encounter with Jews from the Middle East.

During a year-long Jewish Agency program, I spent six weeks in a moshav in Israel’s northern Negev with immigrants from a mountain community southwest of Tripoli (Libya). Those weeks turned out to be the most interesting period of my year and I wished to learn more about Middle Eastern Jewry. Returning to BA studies in the fall of 1959, and unable to find courses related to the topic, I took the path of concentrating in anthropology.

Anthropology values the study of any group, but no instructor had an inkling about Middle Eastern Jews.

Anthropology values the study of any group, but no instructor had an inkling about Middle Eastern Jews. In graduate school I studied basic Arabic while aware that the speech of immigrants in Israel differed from my classroom experience. I also gathered that there existed little research on Jews from Libya. Returning to Israel in September 1963 for dissertation fieldwork, I visited Shalva—the moshav that hosted me four years earlier—and was welcomed by Rabbi Gabriel Megiddish. Eventually I chose Porat—another moshav settled by small-town Tripolitanians—as my fieldwork site. 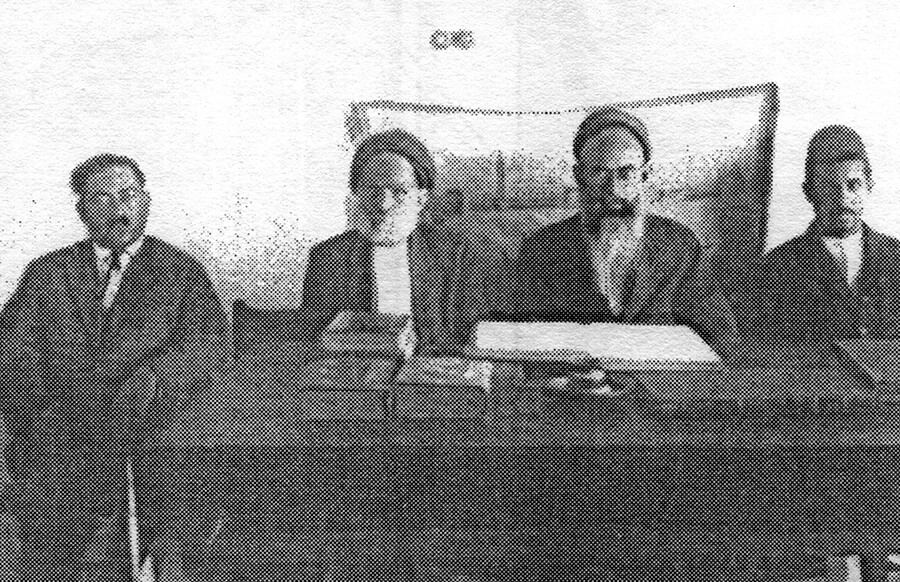 Mordecai Hacohen (second from left) when he was a dayyan in the rabbinical court in Benghazi in the 1920s. Courtesy of the World Organization of Libyan Jews

Like other research at the time, my inquiry first focused on the villagers’ adjustment to Israel. Fieldwork, however, pushed me to consider their past as well. The Porat villagers’ forbears already had made an appearance on the pages of modern Jewish scholarship in the work of Nahum Slouschz—a member of the circle of Odessa Hebraists that included Aḥad Ha-'am and Bialik—who was sent to Libya in 1906 by the Alliance Israélite Universelle. Guided by a local ḥakham, Slouschz visited the Gharian plateau south of Tripoli (home region of the Poratniks), and wrote of the Jews in what he called “the country of the cave-dwellers.”

After completing my dissertation, I wanted to explore further the history of Libyan Jews. In a 1968–69 pilot study in Israel I mapped customs and language features of the former Tripolitanian communities, attempting to tap historical dimensions of a region yielding few written records. That year, I also heard about an unpublished manuscript on Jews in Libya, lying in Israel’s National Library. It turned out to be a 250-page Hebrew codex, in “Rashi script,” by Mordecai Hacohen, the person who guided Slouschz in the Gharian and through all of Libya’s Jewish communities. 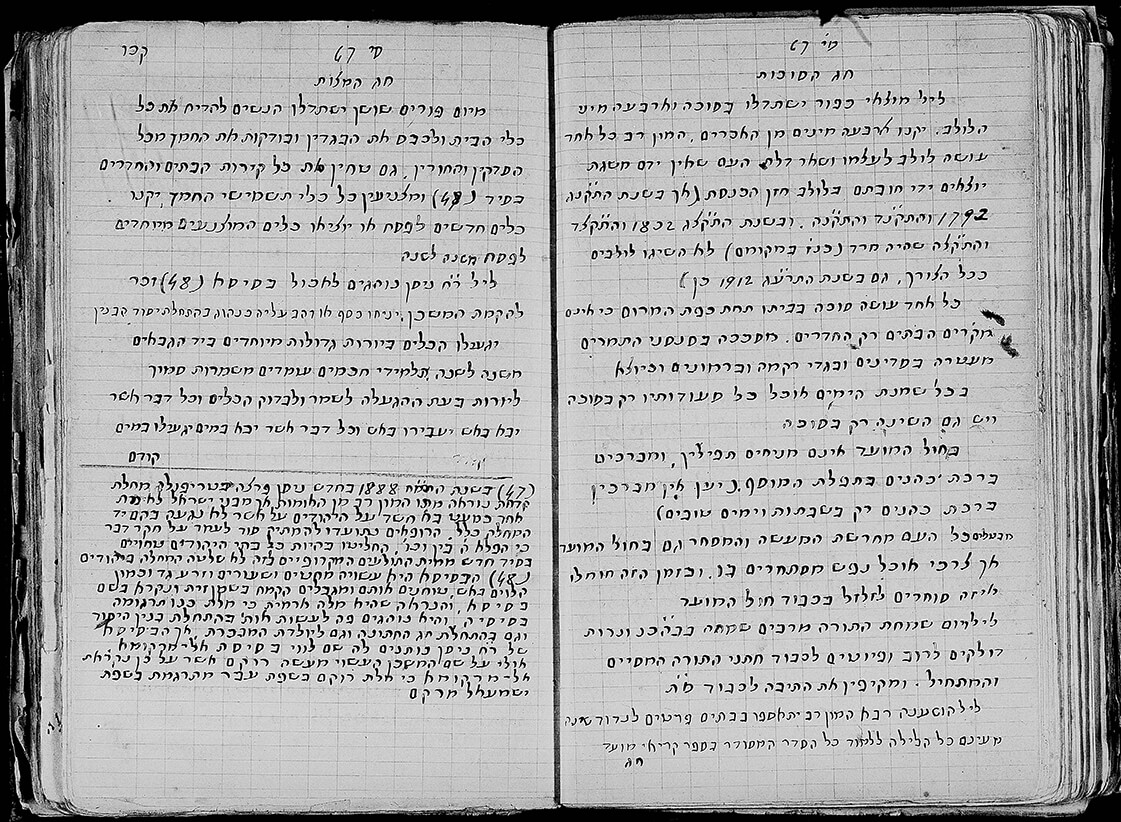 Higgid Mordecai (Tripoli), 66b- 67a. Collection of the National Library of Israel Jerusalem

One-fifth of the manuscript describes the small communities that were precisely the topic of my research. After moving to Israel, I envisioned translating that section while adding a commentary, and approached the Ben-Zvi Institute with this plan. The manuscript reached Israel in the early 1940s and only a few researchers paid attention to it. A translation did not interest Ben-Zvi, but they suggested that I publish the whole manuscript. I hesitated; I did not perceive myself as a textual scholar, and the work was encyclopedic in scope. For example, it depicts local occupations and, when, mentioning the fauna of Libya, Hacohen enters his objections to Darwin's theory. He also refers to writings in Hebrew, Arabic, and Italian, describes contemporary Libyan society, and notes differences in the local Arabic of the Jews and Muslims. Ben-Zvi nevertheless continued to encourage me, and—with input from many specialists—Higgid Mordecai (Hacohen’s title) appeared in 1978.

This success story, however, opened new challenges. Who might read the book?—a question relevant to the whole new field of modern Middle Eastern Jewry. Hacohen’s discussions always began by describing the wider society, and—in my judgement—contribute to general Libyan history. This perspective often is overlooked. Large-scale emigration from Muslim lands starkly reduced their Jewish populations, and the engagement with nation-building forces in Israel downplayed the immigrants’ Middle Eastern backgrounds. Both scholars of Middle Eastern countries—if they mentioned Jews at all—and investigations by Israeli researchers, circumscribed the historic involvement of Jews in their societies of origin.

In 1980 I published the translation I first planned—focusing on small communities—while convinced that other parts of Higgid Mordecai also merited translation. Each required different academic strengths and collaboration. Some, like the workings of Tripoli’s bet din, demanded knowledge of rabbinic sources, while discussions of how turn-of-the-century Ottoman reforms impacted local inhabitants—both Muslims and Jews and relations between them—needed a range of Middle Eastern specialists. My limited experience with Arabic, and complete ignorance of Turkish, were impediments to progressing on my own.

Various factors made such cooperation unlikely. A degree of academic courage was needed for a researcher residing, or working, in a Middle Eastern country to join a project with an Israeli anthropologist. As noted, there also were conceptual biases. Only a handful of veteran historians in Israel studied modern Middle Eastern Jewry; Hacohen's manuscript remaining unpublished so long exemplifies that. The struggle for, and drama of, national independence within North Africa easily relegated the topic of Jewish life to footnote-like status. But the history of Higgid Mordecai includes an episode suggesting that this widespread academic ignorance did not reflect the realities of Jewish-Muslim existence in the area.

Part of Higgid Mordecai was published in Italian (Benghazi, 1924) when Hacohen collaborated with orientalist M. M. Moreno, assigned to Libya by Italy’s ministry of colonies. The translation was reissued by Darf Publishers in London (1987). Darf’s owner, Libyan-born Mohammad Fergiani, owned a printing business and bookstore in Tripoli. In London, he published books on the Middle East, especially reprints of books on Libya—including the Cohen/Moreno volume. I inquired about Fergiani, and in 1992 a Tripoli-born Jewish friend in London arranged a meeting that resulted in Darf’s reissuing my translation (The Book of Mordechai). Upon chatting with Fergiani, I discovered that his family originated from the Gharian region and his father knew the Jews there. The normalcy of this Muslim-Jewish interaction, recalled in a London office, has only gradually reached academic echelons.

For some time there has been growing interest within North Africa in diversifying approaches to regional history. An example is the 2005 publication by Dr. Khalifa al-Aḥwal of his enquiry into the Jews in Tripoli under Italian rule. In addition to representing a fresh intellectual orientation, this study draws on local archival sources that were not accessible to previous researchers. Its dual-track contribution was appreciated by Jews from Libya in Israel. This year, the World Organization of Libyan Jews (in Or Yehuda) sponsored a translation of the book from Arabic into Hebrew. No doubt, this coordinated project enriches all who are interested in learning about that community. Exploring the further research potential of “Mordecai’s Manuscript” also invites interdisciplinary and transnational collaboration. Such development certainly would advance the study of Middle Eastern Jewry in general. 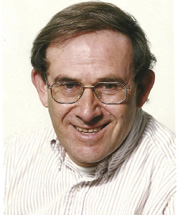 Harvey E. Goldberg is professor emeritus in the Department of Sociology and Anthropology at the Hebrew University of Jerusalem.